360-DEGREE LIVES: Fluffy chincillas have mischievous side when seen in light of day 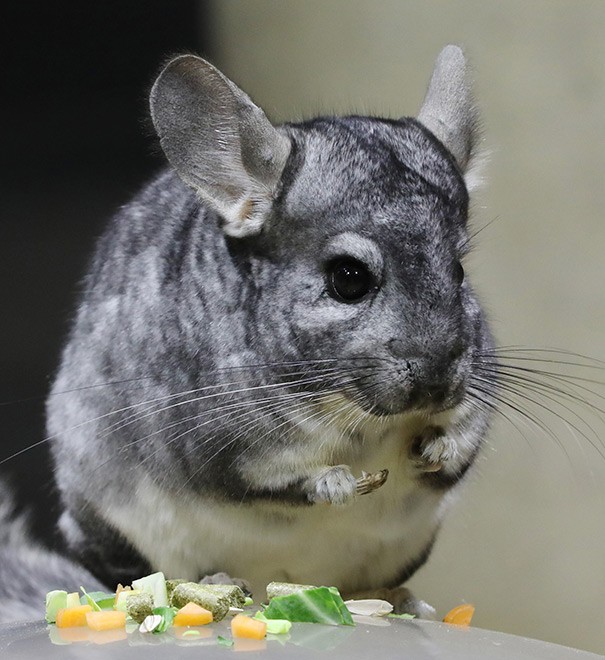 As chinchillas usually stay hidden behind rocks and remain in their burrows during the day, a zoo in Tokyo’s Adachi Ward offers a rare chance to see them in action.

Characterized by its round body covered in fluffy fur, the chinchilla is a member of the rodent family.

“They are coming out any time now,” said Harunobu Hiroshige, a commentator at the Adachi Park of Living Things, before bringing grass hay, apples and carrots into the exhibition area. The chinchillas are fed at 4 p.m. daily at the zoo.

The rodents soon showed their faces. They were about 20 centimeters long. Contrary to their appearance, the chinchillas were actually agile and had a great jumping ability.

While they munched on their food, the rodents also took an interest in the camera and showed their mischievous nature, scratching at and biting on the lens filter and even trying to dig up the device.

I was given a special chance to touch a chinchilla. It had a dense covering of fur that was fine, smooth and perfectly fluffy.

According to Hiroshige, chinchillas are endemic to the alpine region of Chile in South America. There was a time when the number of chinchillas had dramatically declined because of overhunting for their fur.

Chinchillas are currently protected under the Washington Convention, and it is prohibited to capture and trade wild chinchillas for commercial purposes.