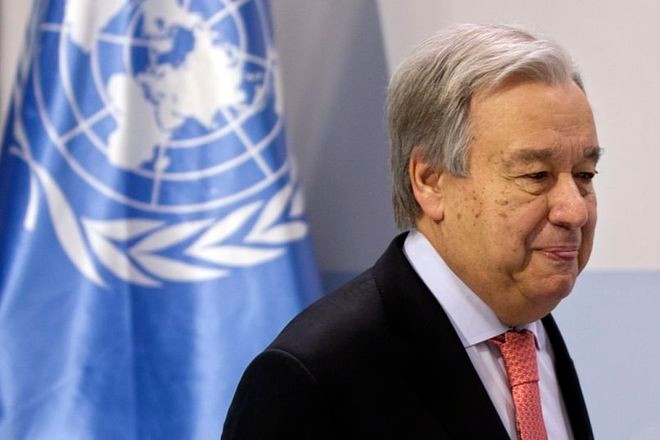 U.N. Secretary-General Antonio Guterres speaks during a news conference at the COP25 summit in Madrid on Dec. 1, 2019. (AP Photo)

This is the first year when countries are required by the Paris climate agreement to unveil new plans to reduce their greenhouse gas emissions under five-yearly cycles of global stocktaking.

Each nation is required every five years to develop its own emissions reduction plans to "reflect its highest possible ambition.”

The world has to step up their efforts to stop harmful climate change under the new international framework.

Global carbon dioxide (CO2) emissions and concentrations are currently at the highest levels in human history, causing more and more extreme weather events and natural disasters all over the planet. It would be no exaggeration to say that the world is facing a “climate crisis.”

The world is already 1 degree warmer than at the onset of the Industrial Revolution. The Paris Agreement is aimed at reducing global emissions of greenhouse gases deeply enough to prevent global average temperatures from rising more than 2 degrees Celsius above pre-industrial levels and calls for efforts to limit the temperature increase to 1.5 degrees.

To achieve the goal, planet-warming CO2 emissions need to be reduced to net zero as soon as possible. Each country needs to make a renewed determination to set out on bold reforms required to make that happen.

In the minister’s office in the Environment Ministry, a large map of Japan is put up. A small red sticker is put on 33 locations on the map, from the northern Tohoku region to Kyushu, the nation’s southernmost main island. Each indicates a local government that has pledged to reduce its CO2 emissions to net zero by 2050.

Each of these local governments has started taking its own specific steps to hit the target.

Last year, Yokohama reached an agreement to buy electricity generated with renewable energy sources in 12 municipalities in the Tohoku region and supply the power to businesses and families in the city. The program has already been partially launched.

Since there is only limited space in Yokohama for solar and wind power generation, the municipal government has turned to Tohoku, which is rich in renewable energy resources, for green power.

Tokyo has set a goal of raising the share of zero-emission vehicles in overall new passenger car sales to half by 2030, while Kyoto is pursuing an agenda to expand the use of public transportation services and bicycles to become a cleaner “walking city.” Different municipalities are tackling the challenge under different approaches.

The 33 municipalities, which have a combined population of 49 million, are collectively responsible for 250 trillion yen ($2.271 trillion) of economic output. Their efforts are certain to make a great contribution to Japan’s struggle to carve out a carbon-free future for itself.

Meanwhile, a growing number of Japanese companies are also committing themselves to reducing their carbon footprints.

A total of 30 Japanese companies have joined RE100, a global initiative of business entities committed to using only renewable electricity for their operations. Japan accounts for 59 of the 321 companies that have been internationally recognized to be committed to “Science Based Targets" (SBTs), or greenhouse gas emission reduction targets in line with climate science and the Paris climate accord.

LONG WAY TO GO TO A CARBON-FREE FUTURE

These companies’ efforts to improve their green credentials are driven by concerns that they will be abandoned by both consumers and investors unless they take action quickly.

Last summer, Daiwa House Industry Co., a major homebuilder, started building a new green town completely powered by renewable energy in Funabashi, Chiba Prefecture. Condominiums, detached houses, commercial facilities and all other buildings and facilities in the town will be totally powered by electricity generated with the company’s hydraulic power plant and other renewable energy sources.

The company has gone so far as to prohibit itself from using any non-renewable energy for the construction of the town as well.

Companies in a wide range of industries are making various efforts to reduce their CO2 emissions. A food maker, for instance, uses lighter packaging materials to reduce the consumption of fossil fuels for transporting its products. A logistics services company has installed solar panels on the roofs of its branches nationwide.

A beverages maker uses biogas produced in the manufacturing process as a fuel.

Many companies are also coming under pressure from their environmentally conscious business partners to take action. A virtuous cycle of efforts fueling further efforts is emerging.

Japan’s overall greenhouse gas emissions in fiscal 2018 declined 3.6 percent from the previous year. Of the Group of 20 nations, only Japan and Britain reduced their planet-warming emissions for the past five years in a row.

Continued efforts by local governments and businesses to reduce their CO2 emissions will help keep the trend going.

But Japan still has a long way to go to put itself on a solid path toward achieving the goal of lowering its CO2 emissions to net zero.

That requires strong and effective political leadership to widen the scope of zero-carbon efforts and accelerate the trend.

Last month, the European Union nations (excluding Poland) agreed to cut the bloc’s greenhouse gas emissions to net zero by 2050. The move came as the leaders of the EU countries shared the recognition of the seriousness of the climate crisis despite different situations in their countries.

FOSTERING THE SEEDS OF HOPE

Unfortunately, Prime Minister Shinzo Abe’s administration does not seem to share this perception.

The government’s new long-term strategy for combatting global warming, unveiled last year, says Japan should aim to phase out its net greenhouse gas emissions. But the government remains noncommittal as to the time frame for achieving the crucial goal, referring only to “the earliest possible time in the second half of this century.”

With regard to thermal power plants that utilize coal as a fuel source, which are major polluters, the government has no plans to shut them down while promising to lower the nation’s dependence on them as much as possible.

The Abe administration is reluctant to make a clear policy shift to push the nation stronger toward a carbon-free future because some industries that are big emitters are opposed to stronger policy measures to tackle the challenge. Both the prime minister’s office and the industry ministry place great importance on the voices of these industries.

The government’s weak-kneed stance makes it difficult for Japan to carry through radical social and economic reforms to reduce its carbon footprint.

If it wants to nurture “seeds of a carbon-free future,” the government needs to demonstrate an all-out commitment to meeting the climate crisis and urge local governments and companies to make massive investments to promote the cause.

This is the first year since the Paris Agreement when countries are supposed to come together to assess the progress they have made and submit their new plans for further progress.

United Nations Secretary-General Antonio Guterres has called on countries to raise their emissions targets. This is a great opportunity for Tokyo to announce new clear policy goals, such as reducing its emissions to net zero or phasing out coal-burning power generation.

As it happens, the government is set to start discussions on a revision to its Basic Energy Plan. Stepping up policy efforts to tackle climate change requires a sweeping review of its vision for the future of the nation’s energy mix.

The government needs to craft an action plan to gradually reduce the share of coal thermal power generation in line with a time frame for phasing out the use of coal as a fuel. It also needs to map out a plan to decommission aging nuclear reactors and replace them with solar and wind power facilities according to a dramatically raised goal for expanding renewable energy.

With the process of efforts under the Paris accord kicking in, Japan needs such blueprints to help protect the health of this planet.