Tokyu to launch posh train tours in Hokkaido this summer 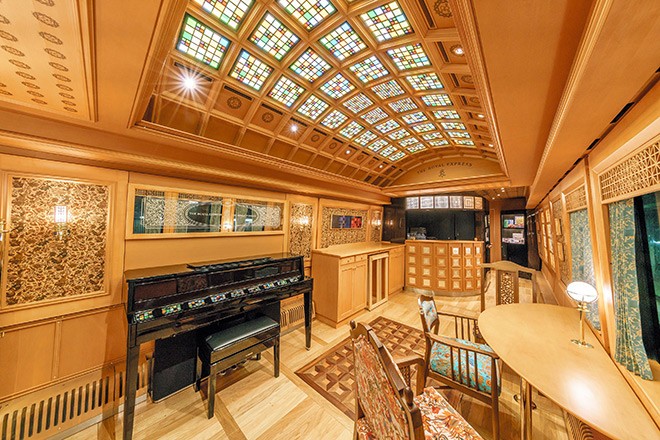 The interior of the swanky Royal Express train (Provided by Hokkaido Railway Co.)

A swanky train will be used for five luxury sightseeing tours in Hokkaido this summer, in a joint effort to promote tourism in the region following a powerful quake in 2018.

Tokyu Corp., a Tokyo-based leading railway and real estate company, will use the Royal Express for the four-day journey on Japan's northernmost main island.

The train is also used for a luxury tour along the Izu Peninsula south of the capital.

The Hokkaido tours, scheduled to run between August and September, will take four days and three nights, with guests sleeping at hotels. The price starts at 680,000 yen ($6,200) per person.

Each tour, accommodating up to 30 passengers, is at the same level as those offered by railway operators, such as East Japan Railway Co.'s deluxe sleeper Train Suite Shiki-Shima.

The first Royal Express tour in Hokkaido begins on Aug. 14, with the last departing on Sept. 15.

The train will stop in each area during lunch, allowing sushi chefs and local cooks to board the train and prepare food for passengers.

Guests will stay at hotels in Tokachi, Shiretoko and Furano.

The tour was developed in collaboration with Hokkaido Railway Co. and other entities that have been working to rebuild the local economy since southern Hokkaido was struck by a powerful earthquake in September 2018.

The Royal Express, originally eight cars, will run with five to accommodate the length of train platforms in Hokkaido.

A diesel locomotive will pull the train when it is traveling in sections of the route that are not electrified.