Tokyo shop deals in embroidery to empower women in Bangladesh 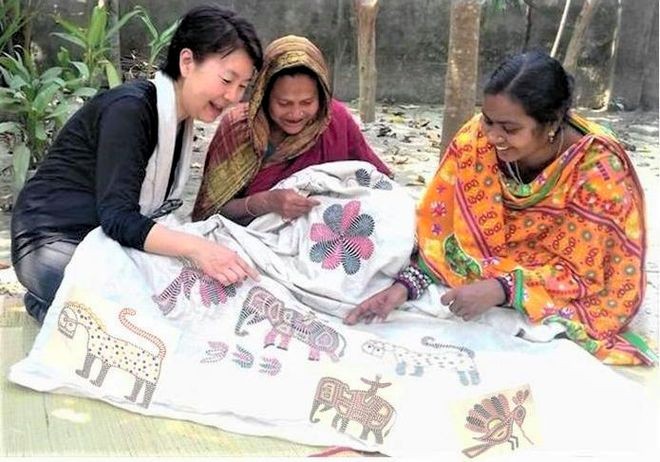 Mieko Magami during her visit to Bangladesh (Provided by Mieko Magami)

A small shop in Tokyo has helped to empower women and improve lives in Bangladesh for many years through fair trade of a traditional form of embroidery.

Roshun, run by Mieko Magami and her husband, Shinji, in the capital’s Nakano Ward, sells “nakshi kantha” embroidered clothing and fancy goods made in Bangladesh.

Part of the proceeds are sent to the South Asian nation as an important source of revenue for women there.

Mieko, 63, and Shinji, 65, started working in Bangladesh as Japan Overseas Cooperation Volunteers in the first half of the 1980s. They found nakshi kantha embroidery useful and saw it as a way for Bangladeshi villagers to earn cash and improve their living conditions.

But the two had to persistently ask worried husbands and fathers to allow their wives and daughters to join a training session organized in Dhaka. The effort resulted in the start of the fair trade project involving 16 members.

The couple returned to Japan in 1986 and then married. The following year, they set up a support organization called Roshun.

Shinji was working at a company in those days, but he quit his job about five years later to concentrate on the Bangladesh project.

The Magamis opened the Tokyo outlet in 2003. They have been increasingly allowed to present the products at department stores and galleries.

The couple not only sell the products but also organize sessions to introduce nakshi kantha embroidery and hold cooking lessons to help Japanese learn more about Bangladesh.

Mieko has repeatedly visited Bangladesh to ensure the development of high quality goods that would be accepted by Japanese consumers.

“We proceeded with our plan by trial and error, and it required great persistence and endurance from both of us,” Mieko said.

As the project progressed, some changes arose among the villagers. Modest women began making aggressive efforts on their own, and husbands who initially opposed their spouses’ working outside showed up to lend a hand.

Female leaders have emerged, while the number of households involved in the program has risen to 450.

When customers say that products from developing nations should be cheaper, the Magamis carefully explain the background, significance and exceptional quality of the items.

“It moves me to tears when customers tell me that they considered our items expensive at first but then found them reasonable,” Mieko said.

Although Bangladesh has recently seen rapid economic growth, women in the important sewing industry are still forced to work in terrible conditions.

“Many challenges remain in the workplaces, but we will continue our efforts until the activity can be managed by local residents and thus be made sustainable,” Mieko said.

The Roshun shop is a one-minute walk from the south exit of Seibu Toritsu-Kasei Station. It is closed on Wednesdays and may not be open on days when special exhibitions are held.

A display and sales session will take place at a gallery in Kunitachi, western Tokyo, from March 18 through 29.

Why ‘big-boned’ policy measure has come to lose its meaning

Matsutake latest to join the list of disappearing delicacies

Tokyo shopkeepers brace for another slowdown as coronavirus flares