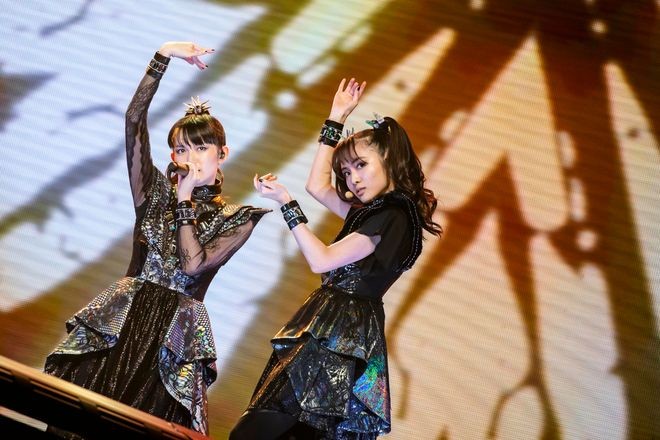 Babymetal holds its first solo arena concert in the United States in October at the Forum in Los Angeles. From left, Su-Metal and Moametal (Photo taken and provided by Taku Fujii)

Babymetal may have started out as a “cute” gimmick, but after a decade in the business, the pop-metal band has become a musical force and continues extending its popularity beyond borders.

The group celebrates the 10th anniversary of its founding this year with a number of accomplishments under its belt.

Last June, Babymetal performed at the Glastonbury Festival, one of the largest musical events in the world. With only a few heavy metal musicians joining the festival in England, it was bit of an incongruous venue for Babymetal.

The atmosphere was quiet at the beginning of the set, but as Babymetal’s performance went on, audience members started moshing.

The band’s songs included “Gimme Chocolate!!” about a girl struggling to decide whether to eat chocolate, and “Megitsune” (female fox), the “sore sore” chorus of which is reminiscent of Japanese festival chants.

Moametal, 20, and a support dancer gestured freely around the stage to the wild drum beats and the lyrics belted out in the clear, powerful voice of Su-Metal, 22.

In September, the duo kicked off a world tour that included their first arena performance in the United States. Fans who attended the concerts posted their feelings in various languages on social media.

“They were so young when they debuted, but now they are like ‘foreign celebrities,’” a 55-year-old long-time fan said after attending a Babymetal concert at Saitama Super Arena on Nov. 17. “We can hardly see them (in Japan) anymore.”

Babymetal is not a conventional heavy metal band.

Guitarist Marty Friedman, a former member of popular U.S. heavy metal group Megadeth, said many people who had grown tired of outdated metal music were waiting for a new interpretation.

“There are so many rules in the heavy metal world, and dance is unacceptable,” he said. “But anything goes for them (Babymetal), and they have created a world where fans can smile and enjoy. The songs are well composed, and the backing band also plays heavy and deserves an A-grade.”

Many of Babymetal’s songs appeal to die-hard fans by incorporating different types of genres of heavy metal music, which has become increasingly segmentalized, and quoting phrases from classic songs, according to music journalist Tomonori Shiba.

The group’s latest album features Indian dance music that became a craze in Britain in the 1990s, as well as a popular Thai rapper.

“The time has way passed to talk about the band as just a fun project,” Shiba said. “The creator who faces the past, present and future of metal and the duo who earnestly strive in their performances have won the confidence from fans at home and abroad.”

In addition to its tours abroad and appearances at music festivals, Babymetal in recent years appears to have tried to widen its appeal by opening for and performing with famous bands, including the Red Hot Chili Peppers from the United States.

“Although hip-hop is popular at the moment, there is a deep-rooted fan base for heavy metal across the world,” Shiba said. “If there are 100,000 fans in one country, there would be 4 million in 40 countries. (Babymetal) is playing for keeps by making use of their strength as a ‘global niche’ player.”

'IT WAS SCARY AT FIRST, NOW IT'S FUN'

Su-Metal and Moametal looked back on their 10 years as Babymetal in an interview with The Asahi Shimbun in late 2019.

Question: How do you feel about reaching No. 13 on the U.S. chart?

Su-Metal: It's great how our music is spreading. Some have said that our music is “not metal,” but we have been building Babymetal as we continue our resistance.

But when we became two from three (in 2018), we reflected on ourselves and realized that we were bound by our own thoughts like “this is how Babymetal should be.”

For us, (the new album) is a piece that challenged and evolved ourselves by breaking the frame and meeting an even wider variety of music and people.

Q: What is heavy metal to you two?

Moametal: It was scary at first, but now, I think it is a fun music. It contains strong messages while the lyrics express the intensity of opposition to something, and it also relieves stress when you listen to it. I hope we can deliver such fun through Babymetal.

Su-Metal: When I saw Metallica’s concert six years ago, I felt that the musical intensity of metal is what makes us able to deliver messages from the heart.

Q: What do you think your forte is?

Su-Metal: I guess it would be that we make people wonder and say, “What the heck is it?”

Moametal: We felt uneasy at Glastonbury, but we have always overcome walls. We find it a little fun to perform at an away venue.

Q: The lyrics of your songs are mostly written in Japanese. What’s the overseas reaction to them?

Moametal: We were worried at first, but we also feel that we can be connected with people irrespective of differences in languages and nationalities through music. Many people also sing along with us in Japanese.

Su-Metal: I want to show the charms of “otona kawaii” (adult cuteness) from now on. It’s a little different from remaining cute as young girls. I want to bring out the age-appropriate charms more and evolve.

Moametal: I want to continue to seek fun. I want to bring a smile to many more people.