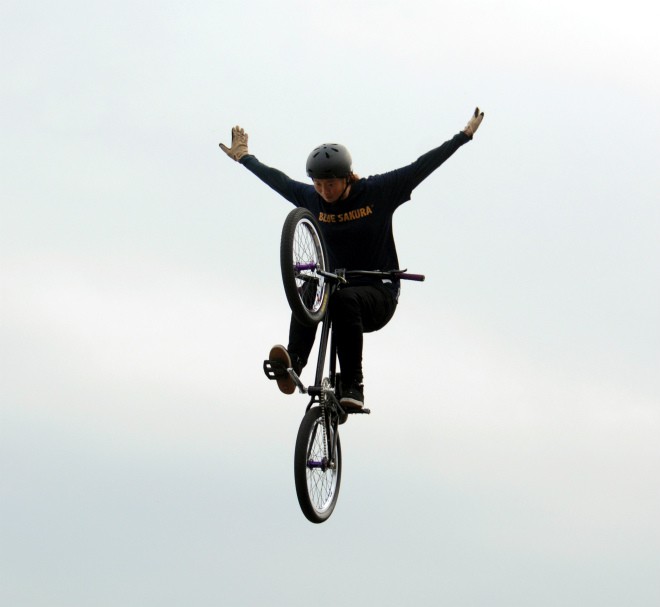 Oike shows the no-hands move that could result in a crash. (Yuki Hanano)

OKAYAMA--Bicycle motocross (BMX) athlete Minato Oike isn't cowed when she thinks of competing at the 2020 Tokyo Olympics this summer as she believes “enjoying performing is the most important thing.”

Oike, 23, became the first Japanese in 2018 to win the BMX Freestyle Park World Cup in France.

Oike, who also won the national championship for three consecutive years, is expected to compete in the Games, as the sport will be included as a new Olympic event.

In the BMX competition, players are scored based on how many times they can perform difficult tricks in one minute.

“It is fantastic to feel many people looking only at me,” said Oike. “I can jump higher with lots of spectators cheering me on.”

Growing up in Shimada, Shizuoka Prefecture, Oike became familiarized with off-road motorbikes from her early days as her father, Takeo, now 57, loves motorcycles and allowed her to ride with him.

When she was 14, Oike happened to see boys jumping from a ramp at a park in the prefecture. Since she hates losing, her competitiveness made her think that, “I can manipulate a bicycle better.”

Oike since devoted herself to practice while watching online videos and learning the skills exhibited by senior riders.

In 2015, Oike graduated from high school and started working at a construction firm in Kanagawa Prefecture. She continued riding in BMX mainly on weekends for pleasure, and began posting her photos and videos on Instagram the following year because she wanted “someone to watch me.”

A short time later, Oike received a message in English asking her to display her skills at the X Games, the world’s most-renowned prize money competition for extreme sports.

Finding the message from a famed female U.S. performer, Oike was surprised and impressed by the fact that such an athlete was “watching me.”

Refining her techniques with top-class riders from around the globe in the United States gave her such great confidence that Oike left her company after she was invited to the X Games the next year. She then started competing in events all over the world.

Around this time, the inclusion of BMX Freestyle Park in the Olympics was announced.

Although Oike casually told people around her that she “would cash in on any opportunities,” she was calm inside as she had not practiced with competing in the top sports extravaganza in mind.

Satoshi Deguchi, 42, the head coach of Japan’s BMX team, said Oike appeared to be unable to enjoy the sport as she was involved in increasingly intense competition following her victory in the World Cup.

Deguchi therefore advised Oike to move to Okayama, his hometown, where many people engage in BMX, so she could concentrate on improving her skills. The city is home to the Degoo BMX Park, which was developed by Deguchi, and features a 2-meter-high jump ramp and steep slope.

After starting practicing in Okayama in 2018, Oike fully committed herself to BMX by polishing her techniques with male athletes.

As the park’s ramp is one of the tallest ones in Japan, Oike said she has overcome her fears of jumping in competition.

Oike seemingly has a carefree personality, but her expression dramatically changes when she mounts her bicycle.

Among the techniques employed by the 169-centimeter-tall Oike, particularly remarkable are the difficult-to-do backflip and the no-hands trick under which the performer takes both hands off the handlebars.

Her elegantly stretched fingers and tall stature enable her to pull off a magnificent no-hands move that can be likened to a bird spreading its wings.
In April 2019, Oike became Japan’s only female professional BMX rider after signing a contract with local firm Vis-A-Vis.

Oike said people now speak to her on the street more frequently and that the number of women who compete in the national championships is gradually rising. The upcoming Olympics is thus the best opportunity for her to play a role as a top athlete to promote the sport of BMX.

“I do not want the current popularity of BMX to be quickly lost,” she said.
Though Oike said she feels a heavy responsibility, she also noted that all she can do is just to perform better.

“The essence of the sport lies in entertainment,” she said. “The one who enjoys it the most will win.”