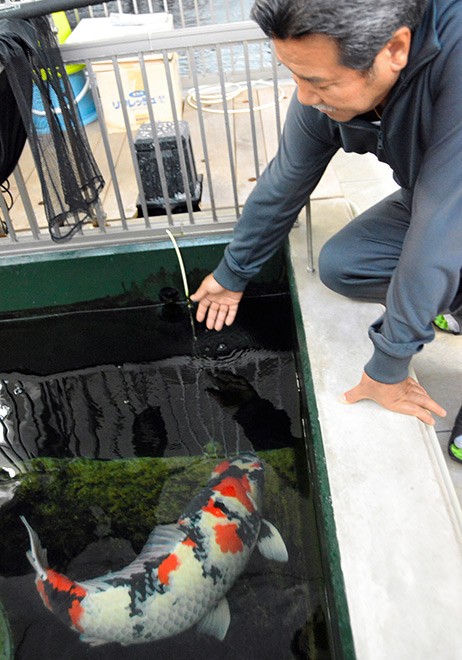 KITA-KYUSHU--Ryuhei Tanaka’s eyes lit up at the sight of a fancy colored carp swimming elegantly behind a show window on a street.

Tanaka, who was around 10 years old at the time, soon made up his mind to raise the world’s best “nishikigoi” carp someday.

“I never knew that such a beautiful creature existed in nature,” he recalled.

His dream came true nearly five decades later, when he became the grand champion at the 55th International Koi Show, one of the world’s two prestigious nishikigoi contests, held in the city of Yamaguchi in November.

His 99-centimeter Shinryu, a black fish with white-and-red patterns, was highly evaluated for its huge body gorgeously decorated with various hues. About 1,400 carp were entered in the competition.

After his fateful encounter, the first thing the young Tanaka did was to ask his father to build a pond in the garden of his home to keep nishikigoi, known as “swimming jewels.”

He bought fish priced from several hundred yen to several thousand yen (several dollars to dozens of dollars). He stayed around the pond, glued to the beauty of the fish.

After turning 30, Tanaka started entering his carp raised by an agent at competitions. Although he won local contests in Fukuoka Prefecture and elsewhere in the Kyushu region, Tanaka still did not have the confidence to compete with rivals from around the globe.

In 2017, Tanaka built a 200-square-meter pool at his home at a cost of tens of millions of yen. A boiler to regulate water temperatures and a filter were also introduced.

He began keeping the carp previously dealt with by the agent in his own pool and gave them food he created fortified with vitamins and calcium.

Tanaka paid careful attention so that his fish do not leap out of the water and get injured, and their health will not deteriorate due to fluctuations in the water temperature.

Black blotches often appear on the skin of grown carp, but Shinryu grew with its colorful pattern not marred. That made him determined to enter the fish in an international contest for the first time.

Nishikigoi are popular among wealthy individuals outside Japan.

Fish raised by agencies commissioned by non-Japanese owners account for 20 percent of entrants in the International Koi Show, according to the organizer Zen Nippon Airinkai.

Foreign owners’ carp are high in quality, and Tanaka’s victory marks the first by a Japanese owner in three years. He is also the first grand champion from Kyushu in 26 years.

A former grand champion carp was sold for 200 million yen, according to the Zen Nippon Airinkai and other sources. Among the popular varieties are red-and-white carp and white carp with red-and-black dots.

Tanaka said he is happy about the growing value of carp, but worried that nishikigoi would become increasingly unfamiliar to Japanese, particularly children.

“Eighty percent of high-quality carp are exported,” he said.

Tanaka said he wants to grow nishikigoi that can win the hearts of young people just as the one that mesmerized him during his childhood.

“Nishikigoi are at their best only for a limited period when they are aged between 10 and 15,” he said. “But they embody Japan’s culture of transient beauty, just like cherry blossoms that must fall someday.”