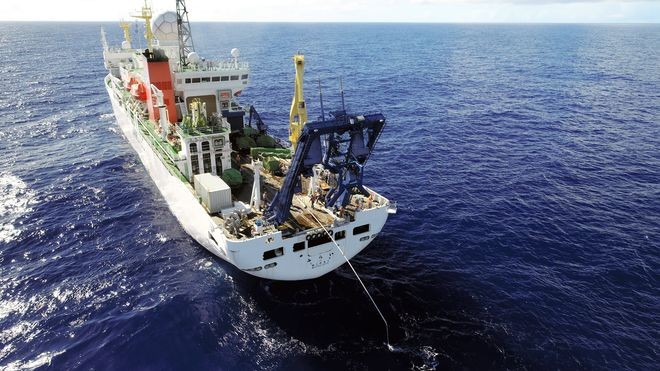 The maritime research vessel Mirai samples sediment on the seafloor. (Provided by the Innovative Technology for Exploration of Deep Sea Resources of the Cabinet Office’s Strategic Innovation Promotion Program)

Japan's ambition to satisfy its own demand for rare earth metals as a shield against the risk of an unstable supply from top global exporter China is a long way from being realized due to difficulties in extracting them from the muddy deep seafloor.

Neodymium, dysprosium and other rare earths are essential to improve capabilities of storage batteries and magnets, which are widely used in smartphones, electric car motors, aircraft, precision equipment and other high-tech devices.

As China produces more than 70 percent of the rare earths the world consumes, there are fears that it could cut the supply to countries over political disagreements.

To offset that risk, Japan started a project to mine rare earths after a huge deposit of the minerals was confirmed in waters off its coast.

In 2012, a University of Tokyo research team said it identified mud rich in rare earths on the seabed 6,000 meters below the surface near Minami-Torishima, the easternmost island in Japan.

Expectations for domestic output of rare earths shot up after a later study suggested the possibility that a large volume of minerals that could support more than 200 years worth of their consumption in the nation lies in the area.

The government in 2018 started the Innovative Technology for Exploration of Deep Sea Resources project under the Strategic Innovation Promotion Program (SIP), where such parties as the Japan Agency for Marine-Earth Science and Technology (JAMSTEC) research rare earth reserves mainly around Minami-Torishima and develop techniques to unearth the elements.

In a survey within Japan’s exclusive economic zone (EEZ), a piece of equipment called a piston corer collected mud from the stratum under the 6,000-meter-deep seafloor.

Taking a single sample eats up an entire day as sending the device into the abyss from a special vessel at a descent rate of 30 meters per minute takes more than 200 minutes to reach the seafloor.

On Nov. 25, SIP unveiled results of an analysis of 46 of its 61 samples gathered over a year and four months, stating that rare earths account for up to 6,220 ppm, or 0.62 percent, in the mud. The highest average content per sample was 3,110 ppm, or 0.31 percent. The samples were rich with neodymium, dysprosium and other key metals.

Under the project, echo survey data from an unmanned explorer that can operate at the depth of 6,000 meters will be combined with the findings of the piston corer research, so that the 3-D distribution of the mineral-rich mud can be pinpointed, according to SIP officials.

“Promising areas that should be developed are being spotted,” said Kosaku Arai, a senior official at the National Institute of Advanced Industrial Science and Technology, commenting on the progress of the research.

The government has kept secret the precise locations and amounts of the reserves.

Revealing such information could increase political friction with Beijing, given the dispute between China and Japan over the Senkaku Islands in Okinawa Prefecture that Tokyo controls but are also claimed by Beijing.

Japan has repeatedly lodged protests with Beijing over Chinese research vessels trespassing in Japan’s EEZ waters off the Senkakus.

“The information is controlled to a significant extent,” said Wataru Azuma, an executive director of JAMSTEC.

Another major challenge is how to efficiently mine the minerals from the seafloor. No country has carried out a project where mud is continuously lifted from a depth of no less than 6,000 meters.

The method currently being considered is to connect the seafloor through a pipe with the deep-sea survey vessel Chikyu. The ship will then send water to the seafloor via a drill pipe while excavating the bottom of the ocean.

The unearthed minerals will be lifted by circulating muddy water containing rare earths through the space between the outer pipe and the inner drill pipe. But the seabed stratum could collapse due to the force of the circulating water, spilling the drilled rare earths and mud into the ocean.

Another problem is that the current technology can allow a pipe up to 30 centimeters in diameter to be set up on the seafloor, putting a cap on the amount of mud collected through the pipe.

Though it is estimated that 3,500 tons of rare earths need to be collected daily to make the business profitable, a paltry 350 tons are expected to be unearthed through the 30-cm pipe even if it operates 10 hours a day.

The SIP program aims to develop a method to produce 350 tons of rare earths daily to “put it on track to commercial application” by fiscal 2022 when the program is scheduled to end.

Getting there hinges on overcoming challenges both concrete and projected.

Vessels that drill for rare earth elements scattered in different layers of the seafloor have to do so while in motion, but a method for doing this has yet to be developed.

Even if Japan becomes able to produce rare earths at a reasonable cost for commercial consumption without government support such as a tax break, the minerals' market price could fall amid global competition and technical advances may eliminate the need for them.

“We need to more carefully examine the amounts of available resources, but I think the project is highly promising,” he said.