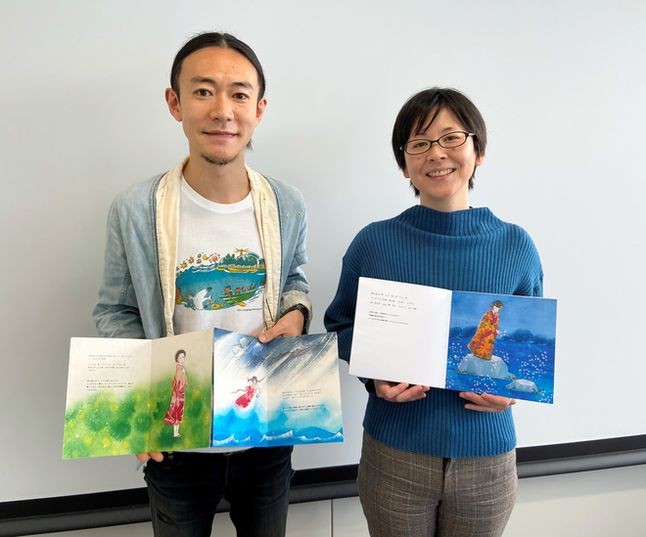 Masahiro Yamada, an associate professor of linguistics, and Natsuko Nakagawa, a project assistant professor, at the National Institute for Japanese Language and Linguistics hold up copies of a picture book they have worked on containing local Okinawan dialects. (Nobuaki Tanaka)

Okinawa Prefecture, home of the Ryukyu Kingdom that was incorporated into Japan in the late 19th century, provides a time capsule of dialects that are in the brink of dying out in the modern age.

Researchers, alarmed at this prospect, plan to release a series of picture books illustrating the diversity of extant Ryukyu dialects in the hope of preserving them.

Masahiro Yamada, an associate professor of linguistics at the National Institute for Japanese Language and Linguistics in Tachikawa, western Tokyo, said he and his colleagues are feverishly working with islanders around Okinawa to complete the publication.

“If nothing is done right now, the dialects will disappear,” said Yamada, 37.

Vastly different variations in local forms of speech have been a mainstay of Okinawa and the nearby Amami islands in Kagoshima Prefecture since olden times. They are said to have branched off from the dominant form of speech that took root in the main Japanese islands prior to the Nara Period (710-784).

Starting in 2010, Yamada started regularly visiting Okinawa’s Yonagunijima, the nation's westernmost island, to meet with elderly islanders to figure out the grammar of the dialect long in decline.

And yet, he discovered that residents of Yonagunijima were having difficulty conveying their dialect to younger generations.

However, Yamada also discovered that not only elderly residents of Yonagunijima but also many young individuals wanted to “learn and keep alive the language used by older people.”

After meeting with islanders, Yamada decided to publish an illustrated book that can be read to children. Acting on the idea, researchers began studying the dialects of Yonagunijima, Taketomijima and Taramajima islands, all of which are situated in Okinawa, as well as Okinoerabujima island in Kagoshima Prefecture, and started cooperating in 2016 to feature those dialects in the books.

Dialects on the islands differ markedly from each other. There are even different expressions for saying, “thank you.”

The picture books are based on old stories and folk songs handed down from generation to generation on the islands. The linguists wrote down the stories in the dialects in which they were spoken.

They also took note of the style and design of clothing worn by residents on each of the islands in the eras depicted in the stories.

The four illustrated works scheduled for release in July will cover Ryukyu dialects spoken on the four islands, along with translations into standard Japanese and English. Explanations of the dialects are provided at the end of the 30-page, A4-size works.

The researchers plan to make 1,000 copies of each version, which presents one of the four dialects, available. They are soliciting donations through a crowdfunding site (https://readyfor.jp/projects/minato) to cover costs.