EDITORIAL: Japan should pledge to phase out coal power plants at COP25 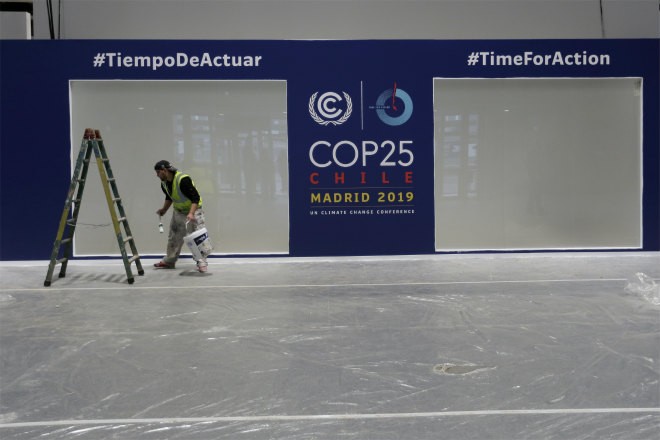 A painter puts the finishing touches to a display stand a day before the start of the COP25 climate conference in Madrid on Dec. 1. (AP Photo)

The international conference on harmful climate change that will start on Dec. 2 in Spain should provide a fresh impetus to international efforts to push the world toward a carbon-free future.

The 2019 United Nations Climate Change Conference, known as COP25 (the 25th Conference of the Parties to the U.N. Framework Convention on Climate Change), needs to serve as a springboard for progress ahead of key 2020 deadlines established by the 2015 Paris Agreement.

Chile presides over the meeting, but the venue has been moved to Madrid due to political unrest in the South American country, which has been rocked by anti-government protests.

The final U.N. climate conference before the defining year of 2020, when many countries must submit new climate action plans, should address all key concerns to ensure that the rules set by the landmark climate pact will be implemented smoothly and effectively.

The Paris Agreement is aimed at reducing global emissions of greenhouse gases deeply enough to prevent global average temperatures from rising more than 2 degrees Celsius above pre-industrial levels and calls for efforts to limit the temperature increase to 1.5 degrees.

But the world is already 1 degree warmer than at the onset of the Industrial Revolution.

Even if all the countries achieve their respective emission-slashing pledges, scientists say, the planet will be on track to warm 3 degrees or more above pre-industrial levels by the end of this century.

The consequences of global warming are becoming increasingly more visible, in such problems as extreme weather events and climate-related natural disasters.

A report from the Intergovernmental Panel on Climate Change, compiled by hundreds of scientists from around the world, has warned that the damage that was previously thought to be caused by a rise in average temperatures by 2 degrees will come much sooner at the 1.5-degree mark.

This dire warning has provoked calls for efforts to limit warming to 1.5 degrees.

This would require countries to step up their efforts to reduce planet-warming emissions to net zero around 2050.

During the U.N. Climate Change Summit in September, many countries pledged to raise their emissions-control targets.

Whether the international community can commit itself to the tougher target of avoiding 1.5 degrees of warming depends on the actions taken by leading emitters.

Regrettably, however, China, the largest polluter, and India, the third-largest emitter, are showing little willingness to embrace higher emissions targets. The United States, second on the list, has even invoked the accord’s formal withdrawal mechanism, a process leading to an official exit in November 2020.

These major powers need to take a fresh, hard look at the fact that they and other members of the Group of 20 account for some 80 percent of global emissions of heat-trapping gases. The top polluters are obliged to lead the international battle against global warming.

Japan, the fifth-largest emitter, is also heavily responsible for the future of the planet.

A growing number of local governments and companies in Japan are taking steps to reduce their carbon footprints. But the central government’s pledge to reduce Japan’s emissions to net zero at the earliest possible date in the second half of this century is not much of a target.

No matter how eloquently Environment Minister Shinjiro Koizumi may talk about Japan’s environment policy at COP25, Tokyo’s seemingly half-hearted pledge will leave many countries doubting whether Japan really understands the urgency of the problem.

If the government cannot announce a new more ambitious emissions target immediately, it should at least declare its intention to raise its commitment level in the near future.

Especially important for Japan is a decision to wean itself from coal-burning thermal power generation. At a time when an increasing number of nations are moving toward ending the use of coal, Japan is the only Group of Seven country that continues building new coal power plants.

A country’s vow to reduce its carbon emissions to net zero sounds hollow if it remains dependent on coal. Japan has no choice but to start moving toward ending the burning of coal if it is really serious about building a carbon-free future for itself.