Removal of melted fuel at Fukushima plant to start in 2021 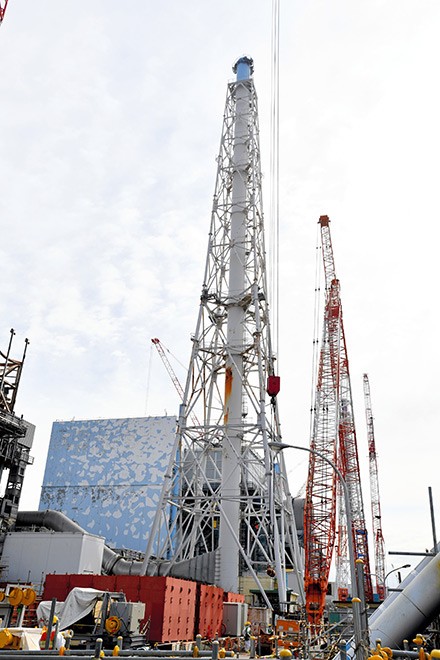 The No. 2 reactor building sits behind a chimney at the Fukushima No. 1 nuclear power plant in February. (Asahi Shimbun file photo)

The government and Tokyo Electric Power Co. plan to start removing melted fuel from the No. 2 reactor at the Fukushima No. 1 nuclear power plant in 2021, according to the latest decommissioning plan.

The draft plan, revised for the fifth time and released on Nov. 2, said the No. 2 reactor was picked first for the removal process because it is safer than the No. 1 and No. 3 reactors, which also melted down after the March 2011 Great East Japan Earthquake and tsunami.

The revised draft plan will be finalized after residents and experts give their opinions to a committee of Cabinet ministers related to the decommissioning and contaminated water problems at the plant. The committee is headed by Chief Cabinet Secretary Yoshihide Suga.

Investigations have confirmed that debris believed to be melted nuclear fuel at the bottom of the containment vessel in the No. 2 reactor building can be lifted by a remote control device.

Studies also showed that radiation exposure to workers would be lower at the No. 2 reactor than at the No. 1 or No. 3 reactors.

Unlike the No. 1 and No. 3 reactor buildings, the No. 2 reactor building was not destroyed by a hydrogen explosion in the early stages of the disaster. The intact structure could help prevent radioactive materials from scattering during the fuel-removal operation.

According to the plan, a few grams of the melted nuclear fuel debris will first be removed for an analysis of the disposition. Based on the results, the size of the operation will expand.

The plan did not mention when work would start to remove melted fuel debris from the No. 1 and No. 3 reactors.