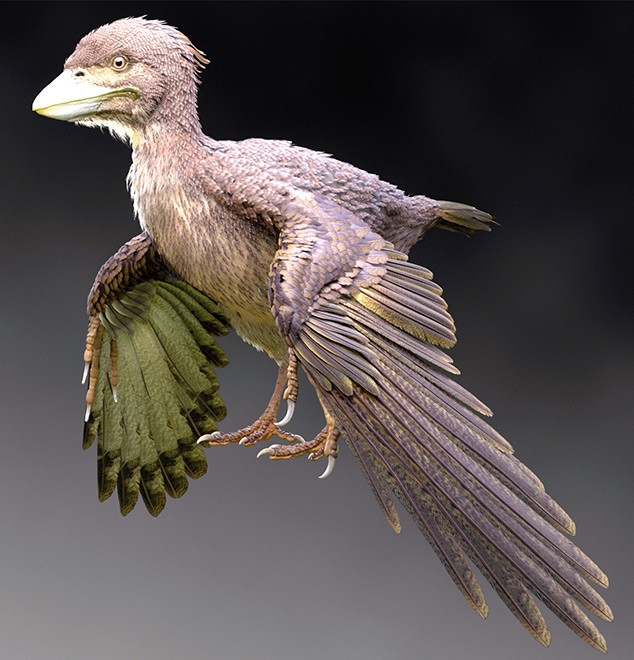 The fossil, named Fukuipteryx prima, which means “primitive wings of Fukui,” was found in sediment at the former site of a river in Katsuyama, Fukui Prefecture, in August 2013.

It is estimated to have had a wingspan of 50 centimeters, and an analysis of its bone tissue showed it was younger than 1 year old.

While archaeopteryx is the oldest known bird that existed 150 million years ago in the latter half of the Jurassic Period, Fukuipteryx prima lived in the first half of the Cretaceous Period.

“The find is extremely significant in figuring out the evolutionary processes of birds,” said Takuya Imai, an assistant professor of paleontology at Fukui Prefectural University’s Institute of Dinosaur Research.

Working with Yoichi Azuma, a specially appointed paleontology professor at the institute, and others, Imai examined 45 bird fossils discovered at the former river site.

The team concluded that the fossilized bird is a previously unknown species after identifying a plowshare bone and humerus with features not found in other bird species.

According to the team, more than 60 varieties of birds emerged in the early Cretaceous Period following archaeopteryx’s appearance.

But more than 90 percent of fossils of such primitive species have been unearthed in northeastern China, so the evolution of birds outside that region remains unknown.

The latest discovery shows not only that an extremely primitive bird inhabited areas outside China but also that birds had already adapted to various environments other than forests, including rivers.

The team’s findings were published in the scientific journal Communications Biology on Nov. 15.