Rail buff opens his own railway network, albeit in miniature 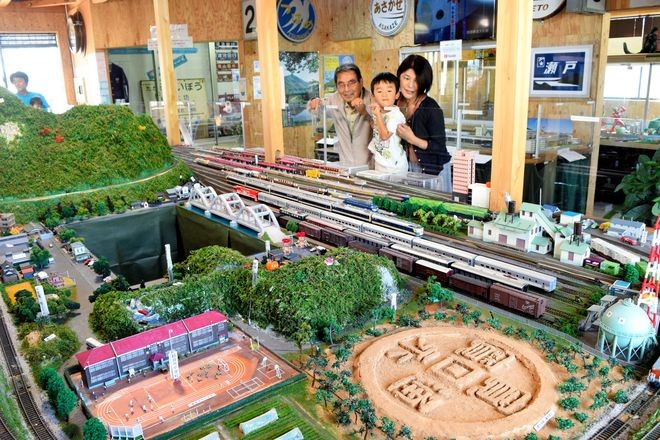 A family gazes at a stunning diorama complete with miniature trains, a recreation of the “zenigata sunae” sand sculpture and other details at the K Train World railway museum in the Toyonakacho-Hijidai district in Mitoyo, Kagawa Prefecture, on Oct. 5. (Setsuko Tachikawa)

MITOYO, Kagawa Prefecture--Lifelong model railway enthusiast Yasuhiro Kigawa is finally on the other side of the tracks, as it were.

Until recently, the retired junior high school P.E. teacher was just another hobbyist, picking up pieces here and there to add to his massive collection.

Then he had his lightbulb moment: It led to setting up his own private model railway museum in front of JR Hijidai Station here.

K Train World opened this fall. It boasts a diorama measuring 3 meters by 8 meters complete with must-see spots in nearby Seisan and a vast array of rare miniature railroad items, including a model train shunting back and forth in the garden.

“I want to help revitalize the community,” said Kigawa, who has been collecting since he was a boy.

The museum is housed in a one-story structure modeled after a station building, and definitely retro in ambience. Discarded railroad ties line the approach to the entrance.

Inside, visitors are greeted by the striking diorama beneath a signboard stating that they are at Track No. 1. Kigawa, 63, spent three years creating the set with assistance from friends and students.

The diorama features popular sightseeing spots, such as Chichibugahama beach, Takaya Jinja shrine, renowned for its “tenku no torii” (shrine gate in the sky), the “zenigata sunae” sand sculpture modeled after an ancient coin, and an aerial gondola system at Unpenji temple. Model trains weave their way across the scene.

The signboard for Track No. 2 highlights a section for materials and items related to railroads, while Track No. 3 is exclusively for kids. There, they can play with Plarail toy trains and immerse themselves in a simulated operating experience.

The interior is packed with railroad items. Overhead racks used in train carriages as luggage space are installed at a cafe attached to the museum, along with priority seats provided for patrons to relax.

Kigawa's hobby was triggered by a present from his parents when he was 2 years old: a first-generation Plarail toy. He now has about 3,000 items, including rare train models from 20 or so countries, which he keeps at home or in a storeroom.

To make use of his vast collection to entertain not only rail fans but also children and adults alike, Kigawa spent his retirement allowance and savings to make his dream come true in the form of K Train World.

“I will dedicate the rest of my life to this,” said Kigawa, who retired in March last year. “My next step is to build a tunnel.”

A miniature train runs on hand-made tracks circling the building, complete with a railroad crossing and barrier that goes up and down.

Inspired by his enthusiasm, the city government and Shikoku Railway Co. (JR Shikoku) offered support by leasing a city-owned vacant lot to Kigawa at a competitive rate.

Officials agreed that the project would help revitalize the community.

Kigawa was also appointed “tourism stationmaster” for Hijidai Station by JR Shikoku to coincide with the opening of the museum.

In September, the museum was playing host to up to 300 visitors a day. Kigawa’s friends serve as volunteers to help manage the facility.

“I came close to giving up many times. I couldn’t have come this far without everyone’s help,” Kigawa said. “The museum seems to have gained a decent reputation, and I’m grateful.”

Hirofumi Hashimoto, 87, visiting the museum from Shodoshima island in the prefecture one weekend in October with his grandson and other family members, said: “I love how the toy trains close in and how they sound. I’m so impressed to see how one person could do it all.”

For more information, visit the official website at (http://k-train.kilo.jp/).