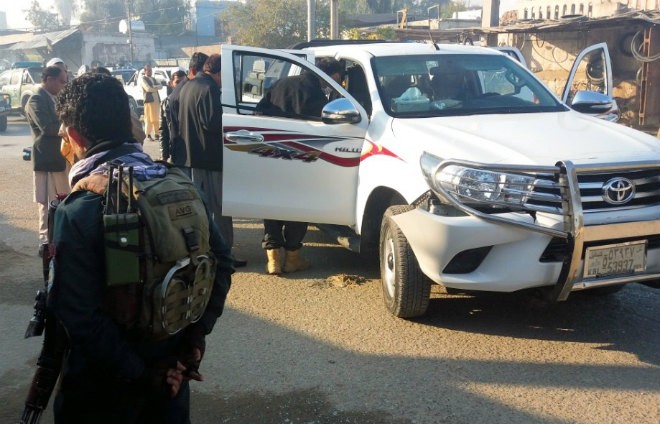 One of the cars that carried Tetsu Nakamura and others on the morning of Dec. 4 when a group of attackers shot them in Jalalabad in eastern Afghanistan (Provided by a local resident)

Japanese doctor and humanitarian Tetsu Nakamura was likely targeted in an ambush in Afghanistan on Dec. 4 aimed at driving off other support organizations and intimidating the local government.

Nakamura, who worked for more than 30 years in war-stricken areas of the country to help with rebuilding, was among six killed in the attack in Jalalabad, according to local authorities.

The ambush occurred on an approximate 20-meter-wide roadway lined with restaurants and hotels in the eastern Afghanistan city.

At around 8 a.m. on the day, two armed men with automatic rifles and pistols appeared on the scene, a 40-year-old resident told The Asahi Shimbun.

When two four-wheel-drive vehicles carrying Nakamura and others drove by, a suspicious-looking white car appeared and blocked their way.

One of the two men then approached Nakamura, who was sitting in the front seat of his vehicle. The gunman shot Nakamura, who fell forward onto the dashboard.

The eyewitness said that there were at least seven attackers in total.

Once the shooting stopped, Nakamura raised his head.

One of the gunmen noticed and yelled, "The Japanese is still alive."

Another man with an automatic rifle then fired three shots at Nakamura through the front windshield.

The attackers then re-entered the white car and a black vehicle and drove off.

The attack lasted for about a minute, the eyewitness said.

According to a 23-year-old doctor who provided emergency medical treatment to Nakamura, the Japanese doctor regained consciousness following the ambush.

"Are you OK?" the doctor asked him.

However, Nakamura didn't utter a word, only nodding his head.

Despite efforts by the medical team to transport Nakamura to a hospital on a U.S. military base in a Kabul suburb, Nakamura died before being loaded onto a helicopter about two hours after the shooting.

No claims of responsibility have emerged as of Dec. 6.

Aid organizations have been the target of attacks by various armed groups in Afghanistan over the years. The country's security authority believes that one such group was involved in the ambush.

The eyewitness said the attackers were young and dressed in ethnic garb, called "shalwar kameez," common in Afghanistan and neighboring Pakistan.

They spoke a language used among the Pashtun people who live near the border region of the two countries, in an accent heard mainly on the Pakistani side.

The design of the attackers' sandals is commonly seen in northwestern Pakistan, the eyewitness added.

Afghanistan’s largest armed group, the Taliban, and a branch organization of the Islamic State have infiltrated the Jalalabad region, with many Pashtuns from Pakistan having joined the groups.

Nakamura and his associates established a nongovernmental organization called Peshawar-kai in 1983 to provide medical care and other humanitarian support to people in Pakistan and Afghanistan.

Nakamura's wife and daughter, along with three others, left Nakamura's hometown of Fukuoka for Afghanistan on the evening of Dec. 5, according to the organization.

Nakamura’s body has been kept at a hospital in Kabul.

(This article was written by Masatomo Norikyo and Akihiko Kaise, both correspondents, and Yuki Edamatsu.)