Local authorities told Nakamura of planned attack against him 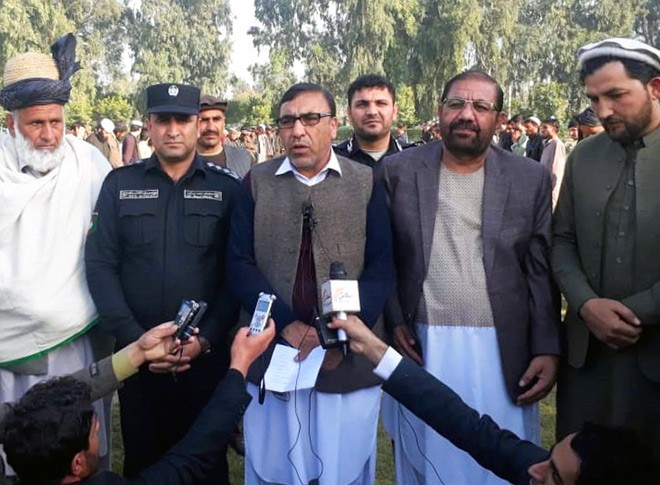 Governor Mahmood Miakhel, center, on Dec. 6 talks about the investigation to identify the suspects who killed Tetsu Nakamura in Nangarhar province in eastern Afghanistan. (The Asahi Shimbun)

BANGKOK--Local authorities in Afghanistan warned Japanese doctor Tetsu Nakamura about a threat against him several days before he died following a deadly ambush on Dec. 4.

A senior official with the government of Nangarhar province in eastern Afghanistan told The Asahi Shimbun on Dec. 7 that provincial authorities alerted Nakamura to a possible attack.

Nakamura, 73, who had long been involved in relief activities in the war-torn country, died after being shot several times along with his driver and four security guards in Jalalabad in the province.

They were in a convoy of two vehicles when a group of young gunmen attacked his lead vehicle.

The security guards were accompanying Nakamura’s vehicle in a trailing four-wheel-drive vehicle.

According to Nangarhar province Governor Mahmood Miakhel and security authorities, they received information from time to time about a plan to abduct or attack Nakamura after Kazuya Ito, 31, a member of Nakamura’s aid group, was abducted and killed in 2008.

This time, Nakamura was cautioned against the threat a month and half before by the provincial government, the sources said. The province’s security authorities issued a similar warning to him several days before the ambush.

The governor said Nakamura did not like being accompanied by security guards because of his deep conviction that continuing on his own with activities that help locals the most was his best defense.

But the governor talked him into agreeing to the dispatch of four security guards in a separate vehicle to protect him.

Nakamura, a native of Fukuoka, was in Afghanistan to direct a canal building project in the eastern part of the country in which his group has long been involved.