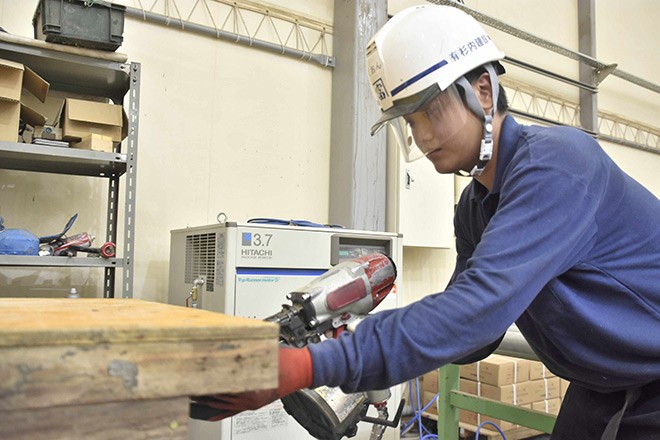 A Vietnamese worker in Saitama Prefecture who is in Japan under the technical intern training program. (Shin Kasahara)

Foreign nationals are flocking to Japan under a much-criticized visa category for technical trainees, but an anticipated influx of those with "specified skills" has not materialized, nor does it look likely to anytime soon.

So what went wrong? Plenty, it turns out.

When legislation passed a year ago to revise the Immigration Control and Refugee Recognition Law to create a new work visa, the government boasted that the system would help alleviate a chronic manpower shortage.

It envisioned as many as 47,000 foreign workers being granted the new visa status in the first year.

But eight months after the new "specified skills" visa was introduced, only 1,732 foreign nationals had qualified as of Dec. 13. The figure represents about 3 percent of the government's goal. With applications numbering 3,700 or so, the target figure seems to have little chance of being met by March.

In contrast, the number of foreign nationals entering Japan under the technical intern training visa continues to soar and could exceed a record 400,000 by the end of the year.

The system has come under intense scrutiny because of low wages and allegations of labor exploitation that prompted many thousands of trainees to flee their workplaces.

The system was set up to provide unskilled people from developing nations with a trade they could employ after they return home following a fixed period of stay in Japan. Critics view the program simply as a ruse for many companies to employ cheap labor.

A range of factors has been cited for the low number of foreign nationals obtaining the specified skills visa.

For a start, the new visa system started only about four months after the immigration control law was revised. Many nations that had been expected to provide workers in large numbers simply did not have the time to adequately prepare and operate a system for the new visa.

Nine Asian nations had been expected to provide the bulk of workers for the specified skills visa, but currently preparations for exams and other measures to implement the new system are only in place in four nations: the Philippines, Cambodia, Nepal and Indonesia.

Vietnam, which has more of its nationals in Japan on the technical intern training program than any other country, has still to complete a domestic system to send out workers on the specified skills visa.

In the meantime, the numbers coming to Japan on the heavily criticized technical intern training program continue to increase. As of the end of June, the figure had reached 367,000 or so, an increase of about 39,000 over the course of six months.

At the same time, little, if anything, has been done to address the harsh conditions facing many trainee interns, judging by the number of those who fled their workplaces. Last year, 9,052 trainees went missing. This year, 4,499 fled in the first six months alone.

Officials of the Immigration Services Agency remain confident that things will eventually settle down, citing a provision allowing those who have been in Japan for three years under the technical intern training visa to convert to the specified skills visa without having to pass the exam on Japanese proficiency and specific skill level.

They said the number on the new work visas is bound to increase because of that special condition.

But organizations involved in managing foreign workers in Japan, as well as agencies that dispatch such individuals, point to various factors that make the technical intern training program more attractive than the specified skills visa.

Akira Kitanaka, who serves as an adviser to Myanmar Unity Co., an organization that recruits workers in Myanmar for dispatch to Japan under the specified skills visa, was scathing about the government's preparations for the new system.

He maintains that not enough exams are given for those interested in obtaining the specific skills visa, and insists it be expanded 100-fold.

By the same token, the Myanmar government has also not hammered out the specifics for organizations like Myanmar Unity, such as the fees the workers are to pay the recruiting organization.

Others criticized the government for simply establishing a new visa framework without including a system or management to operate the new visa.

"The manner in which the government announced the new system was arrogant because it felt that all it had to do was announce a relaxation of rules for accepting workers and Asian nations would happily send out their workers," said one official of a cooperative.

In Vietnam, many organizations continue to send out workers under the technical intern training program because it offers a more profitable return.

The Vietnamese government announced ground rules in September for the dispatch of workers under the specified skills visa. Organizations in Vietnam that provide workers would be eligible to demand a fee of $2,800 (about 300,000 yen) from the Japanese company for each worker accepted. In addition, the individual working in Japan would also be required to forfeit the equivalent of two months' salary to the entity in Vietnam.

As it turns out, some organizations in Vietnam now receive around double the maximum fee of $3,600 set by the Vietnam government for what a Japanese company must pay for accepting a technical intern trainee. Not only that, these entities also receive a small monthly fee from the Japanese company for managing the dispatched workers.

NOT AN ATTRACTIVE OPTION

For Japanese companies considering accepting workers with the specified skills visa, the paperwork required to obtain the visa is a major headache. They must submit about 200 pages of documents for each individual.

Moreover, because the companies are required by law to pay similar wage levels as Japanese workers, it simply does not pay to hire those with the specific skill visa because of the other expenses involved, such as fees paid to the dispatching organization abroad.

The workers are also limited to a five-year period of working in Japan under the specified skills visa.

The system would seem to have little merit, not only for the Japanese company but also the foreign worker.

Yoshihisa Saito, an associate professor at Kobe University's Graduate School of International Cooperation Studies who is well-versed in the issue of foreign workers in Japan, is miffed that the spirit of the legal revision is not being followed.

He said it was supposed to have given workers recognized as having specific skills the freedom to change jobs and sign contracts directly with the Japanese company without going through a go-between agency.

Instead, organizations have been set up overseas as well as in Japan to provide support to companies contemplating hiring workers on the specific skills visa. The involvement of such entities makes it difficult for individual workers to deal directly with the companies they want to work for, Saito said.

(This article was compiled from reports by Hiroyoshi Itabashi, Makoto Oda, Mari Fujisaki and Ari Hirayama.)