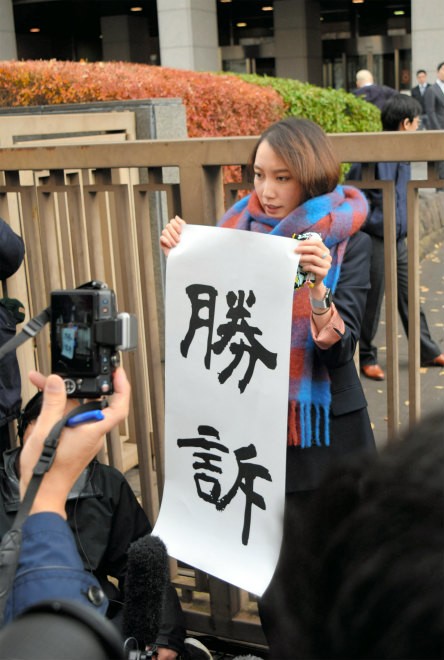 Shiori Ito holds up a sign saying she won her civil lawsuit in front of Tokyo District Court on Dec. 18. (Takuya Kitazawa)

The Tokyo District Court on Dec. 18 ordered a former TV reporter to pay compensation to a journalist who said he had drugged and raped her while she was unconscious at a hotel.

Presiding Judge Akihiro Suzuki of the district court said Ito’s testimony about what had transpired in April 2015 was highly reliable, and he rejected Yamaguchi’s claim that sex between the two was consensual.

Ito sought 11 million yen ($100,000) in compensation for the mental anguish she suffered as a result of the rape. Although the court ordered Yamaguchi to pay only 3.3 million yen, Ito indicated that she was satisfied with the decision.

“Because there was no indictment, I was unable to learn everything about what evidence and testimony had been presented in the criminal case,” Ito told reporters after the ruling. “I am happy that such facts have emerged through the civil lawsuit.”

Ito and Yamaguchi gave clearly different stories about what occurred between them in April 2015. The court’s ruling was based on the reliability of their respective testimony.

According to the ruling, Ito and Yamaguchi had food and drinks at a sushi restaurant in Tokyo and then went to a nearby hotel, where, Yamaguchi claimed, they had consensual sex.

The court agreed with Ito’s statement that she had no memory of what happened because she was so intoxicated that she had trouble even walking into the hotel. It also accepted her argument that Yamaguchi took her to the hotel despite her insistence that she wanted to go home.

Ito did not give her consent inside the hotel, the court ruled, noting that she saw a doctor on the same day and consulted with friends and police about the incident a few days later.

The court added that Yamaguchi continued the assault even after Ito regained consciousness and told him to stop.

The ruling viewed Ito’s testimony as highly reliable while pointing out discrepancies in Yamaguchi’s claims.

Yamaguchi had filed a countersuit seeking compensation from Ito, arguing that she had defamed him through a book she wrote and by her statements at news conferences.

But the district court rejected Yamaguchi’s countersuit, ruling that libel did not exist because Ito’s words were the truth and made as part of her efforts to improve the social circumstances regarding victims of sex crimes.

The Metropolitan Police Department initially investigated the case after Ito submitted a criminal complaint of rape against Yamaguchi. But the Tokyo District Public Prosecutors Office in July 2016 decided not to indict Yamaguchi on grounds there was insufficient evidence.

In May 2017, Ito revealed her name and face when she submitted a request with a prosecution inquest panel to review the case. However, in September 2017, the panel ruled that prosecutors’ decision not to indict Yamaguchi was appropriate.

That led to her civil lawsuit.