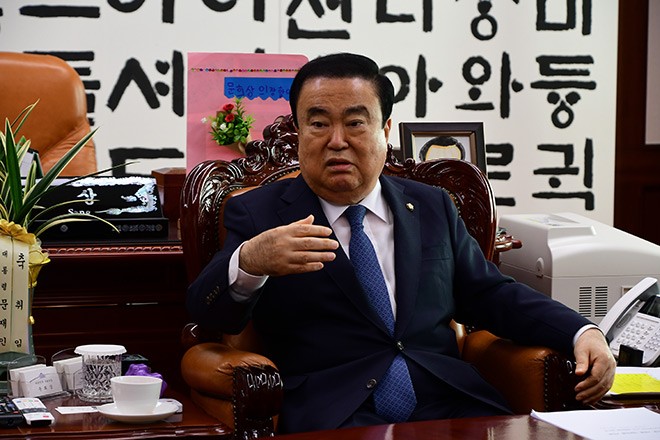 SEOUL--A bill introduced in South Korea’s National Assembly on Dec. 18 to help mend relations with Japan through a foundation to resolve the wartime Korean laborers compensation issue faces opposition from the parties it seeks to benefit.

It is unclear whether the bill, sponsored by assembly Speaker Moon Hee-sang, will be written into law due to many hurdles to be cleared.

The bill envisages the establishment of a “foundation for memories, reconciliation and the future” to solicit public and corporate donations in Japan and South Korea.

Those donations will be used to pay compensation to former wartime laborers if they relinquish their rights to seek redress from Japanese companies in court battles.

Under the envisioned arrangement, the foundation will take over the rights of plaintiffs to receive compensation from sued companies in successful damage lawsuits.

As for plaintiffs whose cases are pending, they will need to drop them to become eligible for payments from the foundation.

It is not known when the legislation will be brought to a vote.

The relationship between Tokyo and Seoul has further soured after South Korea’s top court ordered Japanese companies in rulings since late last year to pay reparations to former wartime laborers.

But Tokyo has long maintained that all wartime compensation issues were settled under a 1965 agreement that restored diplomatic relations between the two countries.

Still, some Japanese government officials expressed hopes that the legislation may lead to the resolution of the prickly issue.

The question may be taken up when Prime Minister Shinzo Abe meets South Korean President Moon Jae-in during a summit that the two countries have been working to hold later this month.

But there are many problems to be overcome before it becomes law.

For example, the bill states that donations should not be forcibly collected, meaning Japanese businesses sued in compensation cases cannot be compelled to give donations.

“It effectively acquits defendants of their responsibility and insults victims,” the statement released by plaintiffs said.

Also, if public opinion in South Korea shifts against the bill, members of the National Assembly who endorsed the legislation may have a change of heart and seek to block its passage.

President Moon has yet to make clear his position on the bill, but he may exercise his veto power.

Even if the legislation is enacted, some plaintiffs who have already won their court fight may refuse to accept funds from the foundation and start procedures to be paid compensation directly from defendant companies.