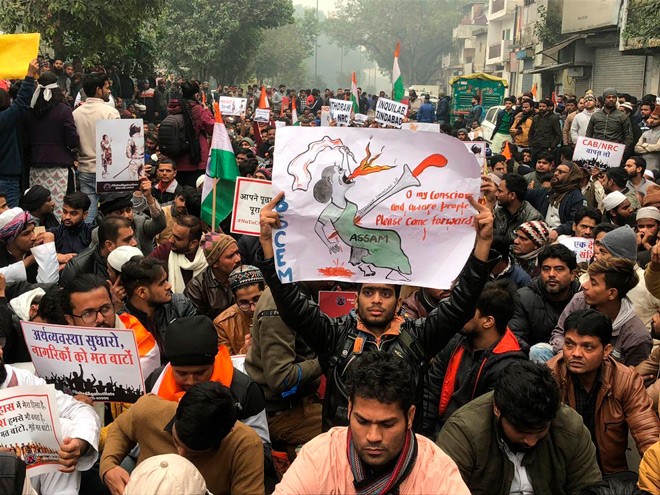 A protester holds up a placard and sits with others in New Delhi on Dec. 19. (AP Photo)

NEW DELHI--Police detained several hundred protesters in some of India's biggest cities Thursday as they defied a ban on assembly that authorities imposed to stop widespread demonstrations against a new citizenship law that opponents say threatens the country's secular democracy.

Dozens of demonstrations were planned around the country as opposition widened to the law, which excludes Muslims. The legislation has sparked anger at what many see as the Hindu nationalist-led government's push to bring India closer to a Hindu state.

Historian Ramchandra Guha, a biographer of independence leader Mohandas Gandhi, was among those detained in Bangalore, the capital of southern Karnataka state. The state government issued a ban on groups of more than four people gathering.

Reached by phone, Guha said he was in a bus with other detainees and did not know where the police were taking them.

In New Delhi, Yogendra Yadav, the chief of the Swaraj India party, was among those detained as protesters demonstrated at New Delhi's iconic Red Fort and the surrounding historic district.

Officials said more than 100 people were detained at the fort.

The protesters were loaded into buses and other vehicles. The main roads leading to the fort were blocked off and police did not let pedestrians go to nearby temples or shopping areas.

Internet and phone services were blocked around the fort and in some other parts of New Delhi, a tactic Indian authorities use in other parts of the country, such as disputed Kashmir, to try to stop people from organizing protests. The measure, however, is rarely used in the capital.

The new citizenship law applies to Hindus, Christians and other religious minorities who are in India illegally but can demonstrate religious persecution in Muslim-majority Bangladesh, Pakistan and Afghanistan. It does not apply to Muslims.

Modi has defended it as a humanitarian gesture.

The law's enactment last week follows a contentious process in northeastern Assam state intended to weed out people who entered illegally. Nearly 2 million people in Assam were excluded from an official list of citizens, about half Hindu and half Muslim, and have been asked to prove their citizenship or else be considered foreign.

India is also building a detention center for some of the tens of thousands of people the courts are expected to ultimately determine have entered illegally. Modi's interior minister, Amit Shah, has pledged to roll out the process nationwide.

Some Muslims fear it's a way for Hindu nationalists to put them in detention or deport them from the country.

On Wednesday, authorities tightened restrictions on protesters, expanding a blockade of the internet and a curfew in Assam.