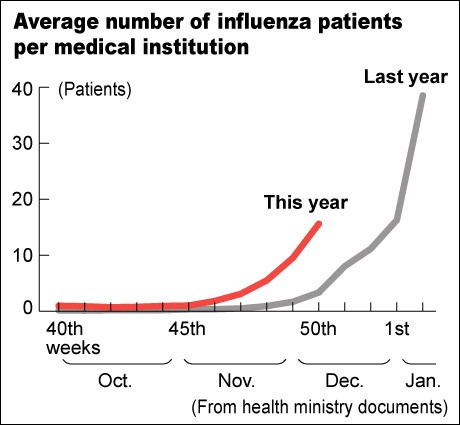 The health ministry warned Dec. 20 that the spread of influenza across the nation had reached near-pandemic levels and urged people to be more vigilant with year-end and New Year holidays looming.

The ministry releases weekly figures of the average number of patients at about 5,000 medical institutions around Japan diagnosed with influenza.

For the week of Dec. 9 until 15, the number of influenza patients was 15.62 people, exceeding for the first time the 10-people benchmark used to issue a caution.

The latest figure was an increase of about 1.6-fold over the previous week when 9.52 people were diagnosed with the flu.

The total number of influenza patients was estimated at about 535,000. Health ministry officials said about 300,000 were under the age of 15.

Yamaguchi Prefecture had the largest number of influenza patients at 31.94 people, meaning the prefecture had already exceeded the "warning" level of 30 people with the flu.

The northernmost main island of Hokkaido also had a high level of influenza patients with 29.76 followed by Miyagi Prefecture with 26.69 and Aomori Prefecture with 24.14. Tokyo had 16.84 flu patients, while there were 16.53 in Aichi Prefecture, 15.83 in Fukuoka Prefecture and 10.09 in Hyogo Prefecture.

The caution level had been exceeded in 33 of the nation's 47 prefectures, more than double the number of prefectures of the previous week.

Over the five latest weeks, 95 percent of the virus found was the same one as the new type discovered in the 2009 epidemic.

This year has been marked by earlier cases of influenza in comparison to past years.

While the peak of the influenza epidemic is normally late January, ministry officials said there was a strong possibility that could be pushed up this year.

Officials are urging caution over the year-end and New Year period when many people travel to their hometowns to be with family members. People are encouraged to wash their hands frequently and wear face masks.

Philippine lawmakers deny license to broadcaster at odds with Duterte