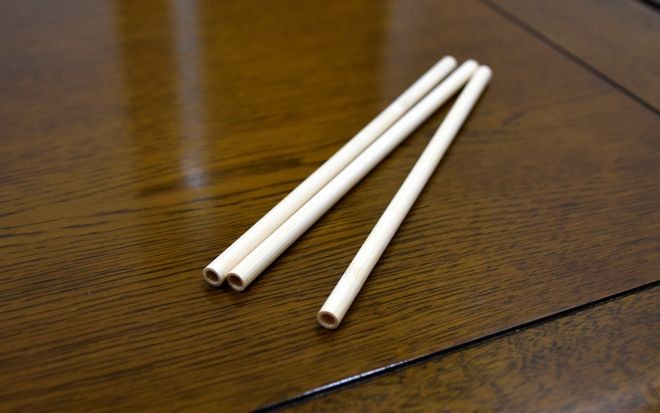 Straws made of bamboo are produced by Hirose Products Co. in Yasugi, Shimane Prefecture, on Nov. 19. (Kai Ichino)

YASUGI, Shimane Prefecture--A skewer maker here is taking a stab at the bamboo straw business, in anticipation of increased demand for eco-friendly alternatives to their plastic counterparts.

While the bamboo straws are more expensive than conventional ones, Hirose Products Co. expects sales to expand following its first shipment last month, as raw bamboo grows relatively fast and puts little burden on the environment.

The newly produced straws are 20 centimeters long, with a diameter of 7.5 millimeters and have a hole 5 mm wide.

Hirose Products already produces wooden and bamboo skewers for yakitori and frankfurters and has a production site in China. The company boasts a 90 percent share of the skewer market in Japan for frankfurters at convenience stores.

The company created the new product with its own technology in response to overseas restrictions on disposable plastic straws.

Manabu Tetsumoto, 39, the company's president, began making bamboo straws on a trial basis at an affiliate factory in Fujian province in China in summer 2017.

However, Tetsumoto struggled with forming the straws, as the bamboo they are made from tend to be curved and it is difficult to drill a straight hole. With his accumulated know-how in processing bamboo products, Tetsumoto took a trial-and-error approach to selecting drills that would not cause warping, while being able to remove the raw material inside.

In January this year, a bamboo straw prototype was finally completed.

The company's first shipment of 500 straws was to accommodation facility Sunrapport Murakumo in Matsue in the prefecture in November. If another order is received, Tetsumoto plans to increase the number of straws he manufactures.

As it takes just four years for bamboo to grow fully, an abundance of resources is available, putting less of a burden on the environment. While the cost of making the bamboo straws is double that of plastic ones, efficient and bulk production could reduce costs in the future.

"If people use bamboo straws at places in their daily lives, the number of people interested in getting rid of plastic will also increase," he said. "I'd like many people to just try them."

Ken Ishibashi, 47, is in charge of facility management of Sunrapport Murakumo, which has introduced the bamboo straws.

"It might be a small step from a global point of view, but I hope this will motivate other facilities to take similar measures," he said.

Ishibashi said the facility started using the straws at its restaurants and party rooms from November and that they have been well received by customers.

Around June, Sunrapport Murakumo started considering phasing out the use of plastic straws with an eye on environmental issues. Initially it planned to use paper straws, but after finding out about bamboo ones, he considered both. In August, he opted for the bamboo ones after trial sessions with the company's staff members.

"Bamboo straws have a softer feel on the mouth. Paper straws make people feel like they are holding a cigarette in their mouths, and they become soggy when inside a drink for a long time," he said. "Many of our staff members preferred the bamboo ones."

Bamboo straws cost the company about 2 yen ($0.02) more per unit compared to plastic ones used before. However, Ishibashi is expecting the facility to use about 1,000 to 1,500 of the bamboo ones per year at his facility, which is one of 37 accommodation facilities run by a public school's mutual support association.

"I'd like to expand the measures in the future based on my initiative," he said.

(This article was written by Kai Ichino and Arata Namima.)