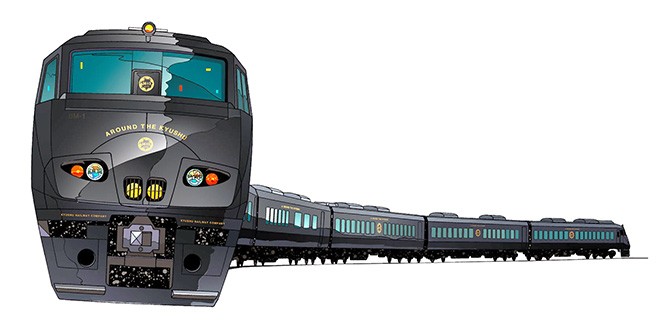 An artist’s rendition of the “36+3” sightseeing train, which will call in at all seven prefectures in the Kyushu region during the course of five days. (Provided by JR Kyushu)

FUKUOKA--Kyushu Railway Co. (JR Kyushu) said it will introduce a sightseeing package in fall 2020 that takes passengers to all seven prefectures in the Kyushu region.

Passengers can opt for the full five days on the “36+3” train or just get on board for a day.

In those instances, they cannot stay overnight.

The service will be offered at a more reasonable rate than the Nanatsuboshi (Seven Stars) luxury sleeper that operates across the Kyushu region.

The 36+3 will be remodeled from a 787 series train previously used for JR Kyushu’s Tsubame express service. Industrial designer Eiji Mitooka, who also handled the Nanatsuboshi, designed the exterior featuring gold letters on a black background.

The interior will feature spacious seats and private compartments, with lunches sourced from ingredients in areas along the route.

Mitooka designed the interior and exterior of the 787 series train, which went into operation in 1992. A shop with a counter commonly known as “Buffet” from the Tsubame will also be revived.

The name 36+3 refers to the fact that Kyushu is the world's 36th-largest island. In addition, the numeral 3 reflects JR Kyushu's wish that customers, local residents and the railway company become one.

The company came up with the name.

The sightseeing train will operate on routes, which change daily. One route will see the 36+3 leave Hakata Station on Thursday and arrive at Kagoshima-Chuo Station by way of Kumamoto Station.

“I hope passengers of all ages will enjoy the ride,” JR Kyushu President Toshihiko Aoyagi said during a news conference on Nov. 21.