In tourist-hungry Gunma, a push to ease tattoo ban at hot springs 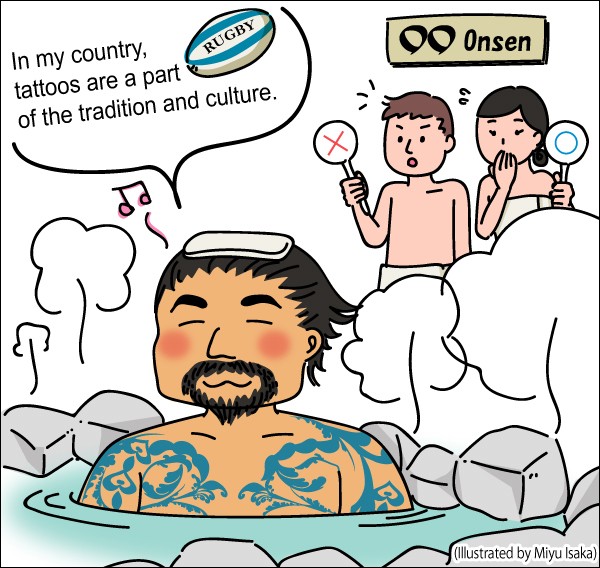 SHIBUKAWA, Gunma Prefecture--The municipal government here is urging hot spring resort operators to drop their tattoo taboo and help the city in its quest to become a multicultural society and popular destination for overseas tourists.

The issue of “onsen” hot spring resorts in Japan banning bathers who have tattoos has long been a complaint among tourists.

But the 2019 Rugby World Cup held in Japan brought into sharp focus the conundrum facing the city.

The bans are in place because tattoos are associated with “anti-social organizations,” the legal words for yakuza gangs and other unsavory organizations.

Questions arose on whether onsen would bar entry to players on the rugby teams of such countries as Samoa and New Zealand, where tattoos have deep connections to their cultures.

In many Western countries, tattoos are also seen as fashion statements, not necessarily membership in organizations known for extortion, racketeering and violence.

“It is dispensable for people with different nationalities and ethnicities to respect each other’s cultural differences,” Takagi said.

The associations let their 44 member hotels decide on their own how to deal with the tattoo issue.

Hideki Takahashi, the head of the hotel cooperative association, did acknowledge the absurdity of associating tattooed tourists with yakuza.

“We can’t force hotels to tolerate (tattoos), but we need to think about tattoo culture and the anti-social thing separately,” he said. “Based on the (mayor’s) request, we would like to deal with the issue using many ideas so that our Japanese customers will understand it.”

The city expects the number of foreign tourists in the area to increase during and after the Tokyo Games.

The area welcomes 1 million hotel guests per year, but only 1.3 percent of them are from abroad.

Seiji Sekiguchi, vice chairman of the tourism association, said a change in thinking may be needed for financial survival, considering the declining birthrate in Japan.

“We can’t ensure the future of tourism if we refuse to accept foreign guests from now,” he said. “We would like to catch up with the times, which requires us to understand foreign cultures.”

The Takaragawa Onsen Osenkaku hotel in Minakami offers beautiful natural views and open-air baths alongside the Takaragawa river. At certain times of the year, nearly 70 percent of its guests are foreign visitors.

“We don’t reject foreigners just because of their tattoos,” a public relations official for the hotel said.

In some cases, the hotel asks foreign guests to cover up their tattoos with towels or to change their bathing times to late at night.

The Kusatsu onsen resort area, which attracts 3 million visitors annually, also leaves the judgment on tattoos to each hotel.

Some hotels prohibit tattooed guests from entering the main bath and ask them to reserve or adjust their bathing times.

“Many foreigners who come to Kusatsu are individual customers accustomed to traveling in Japan,” said Kyoichi Kudo, secretary-general of the Cooperative Kusatsu Onsen Ryokan. “They seem to contact (our onsen resorts to obtain information) before they come.”