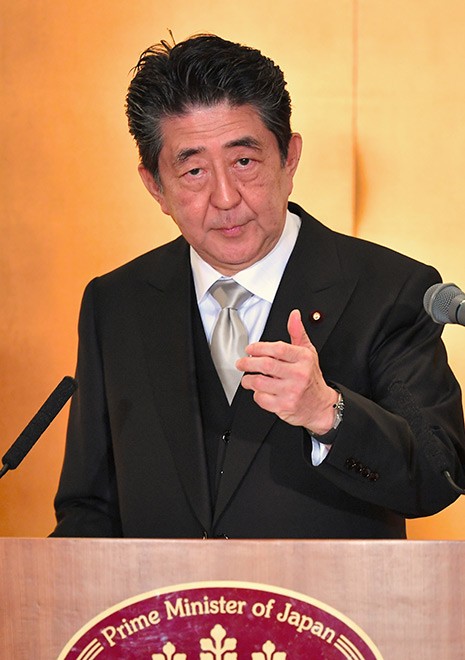 Prime Minister Shinzo Abe responds to a question at his first news conference of the year in Ise, Mie Prefecture, on Jan. 6. (Noboru Tomura)

ISE, Mie Prefecture--The new year may be a time for joy, but Prime Minister Shinzo Abe was in no mood at his first news conference of the year here to address a controversial annual sakura gathering.

Details of the event have sparked controversy since late last year, in part, because the former chairman of Japan Life, a bankrupt company under police investigation for alleged fraudulent rental business operations, was revealed to have been invited to the 2015 installment.

An invitation letter to the individual in question bore the number 60, which is believed to be assigned to those recommended by the prime minister based on past records.

However, Abe looked uncomfortable and took just 30 seconds to respond, avoiding the subject as he has done previously, saying, "I've refrained from answering that question, as information about invitees is personal."

Abe has faced mounting criticism over the annual event in Tokyo over the swollen costs of the party and his apparent use of the function to reward supporters of the ruling Liberal Democratic Party.

The event is supposed to recognize individuals who make remarkable achievements in society.

Various news media polls in recent weeks have consistently shown that a majority of respondents are dissatisfied with Abe's explanation regarding the publicly funded cherry blossom event.

Abe said that he is aware of the criticism and will "consider the results of the opinion polls and sincerely respond to the matter."

The approval rating of the Abe Cabinet has taken a hit owing to revelations of the details of such gatherings and Abe's handling of the matter.

An Asahi Shimbun poll conducted in December found that the disapproval rating exceeded the approval rating for the first time in a year, at 42 percent and 38 percent, respectively.

The rating could drop further, as Tsukasa Akimoto, a member of the LDP in the Lower House, was arrested late last month on suspicion of receiving bribe money from a Chinese company seeking to open a casino in Japan. Akimoto served as a vice minister of the Cabinet Office and presided over issues related to integrated resort projects, including casinos.

The Abe administration is pushing casino-centered resort projects as part of efforts to bolster the economy.

At the close of the news conference, a reporter shouted out a question about suspicions surrounding Diet members accepting bribes over the projects, but Abe left without responding.

The Diet session, scheduled to start Jan. 20, is expected to be dominated by attacks by the opposition bloc against the administration over the sakura gathering and casino projects.

"Abe is cornered at the edge of a cliff," said Kazuo Shii, chairman of the Japanese Communist Party, at a Jan. 6 news conference.