Japan last in female science graduates with master’s or Ph.Ds 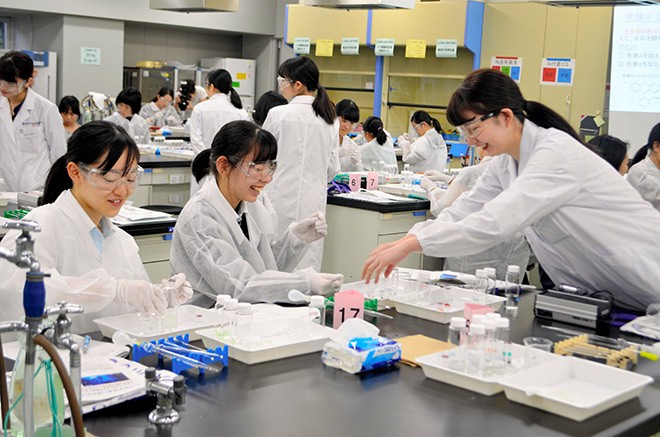 Junior and senior high school students attend a program at Rikkyo University designed to support female students go on to science departments at universities and graduate schools in September. (The Asahi Shimbun)

Japan has the lowest percentage of women graduating from science departments with master's or doctoral degrees out of 43 countries surveyed by the Organization for Economic Cooperation and Development (OECD).

Both male and female students in Japan rank high in science and math on the OECD’s Program for International Student Assessment (PISA), which covers students aged 15 to 16.

But few female students go on to graduate schools in science-related fields, according to the organization’s Education at a Glance 2019 report.

The study found that women accounted for only 23 percent of graduates with master’s and 21 percent of doctoral graduates in natural science, mathematics and statistics in Japan in 2017.

The percentages are just about 60 percent of the figures in the second-lowest ranked nations, Luxembourg, where women accounted for 41 percent of graduates with master's, and South Korea, where they made up 36 percent of doctoral graduates.

Poland, at 74 percent, and Latvia, at 68 percent, topped the list for female graduates with master's and Ph.Ds. The OECD averages were 54 percent for master’s and 46 percent for Ph.Ds.

“The lower rate of women can be likened to using only two cylinders in a four-cylinder engine, with the potential of society being lost,” said Andreas Schleicher, director of the OECD’s Directorate for Education and Skills. “There are few role models for female engineers and researchers, likely resulting in a male-dominated job community.”

Women also made up only 23 percent of the teaching work force in bachelor’s, master’s and doctoral programs in Japan in 2017. South Korea came next at 33 percent. Lithuania’s 57 percent was the highest on the list.

According to the report, Japan invested public funds equivalent to only 2.9 percent of its gross domestic product (GDP) in educational institutions from elementary schools to universities and graduate schools in 2016.

Japan held the bottom rank for three years through 2016 among 35 countries for which comparable statistics were available.

Norway spent 6.3 percent of its GDP, the highest percentage, on educational institutions, followed by Finland at 5.4 percent, and Iceland and Belgium at 5.3 percent. The OECD average was 4.0 percent of GDP.

Public spending on tertiary education accounted for 0.4 percent of Japan’s GDP, less than half of the OECD average of 0.9 percent.