Students invited to pope’s event after visit nixed in Hiroshima 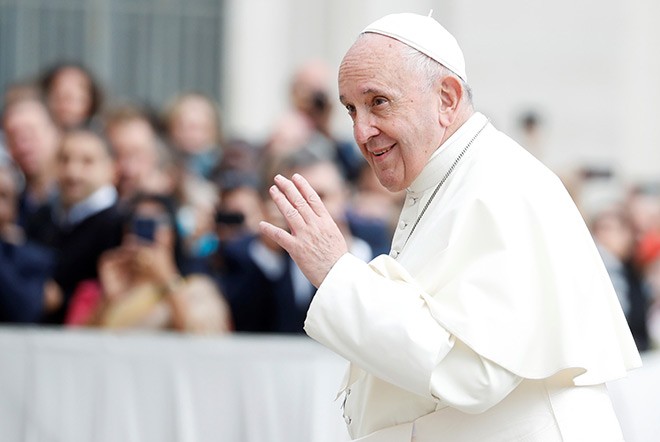 MORIOKA--High school students here were understandably disappointed when their long-prepared school trip to the Hiroshima Peace Memorial Museum was canceled because a VIP from Europe planned to visit the area at the same time.

But after the school principal made a public plea for the students, the museum trip was back on, along with a chance to see in person the VIP, Pope Francis.

On Nov. 24, the students will attend a meeting for peace held by the pope in Hiroshima on the invitation of the Vatican.

“I thought we had no alternative but to accept the cancellation of our school trip to the museum,” said Masato Tsukuta, the 70-year-old principal of Morioka Seio High School in the capital of Iwate Prefecture. “I have never been this happy.”

Hiroshima city officials also decided to open the museum during the night hours after the end of the papal event to accommodate people, like the students, who had planned to visit on that day.

For about 40 years, school trips to Hiroshima have been a proud and important tradition at Morioka Seio High School, which was established in 1948.

In addition to visiting the museum dedicated to victims of the 1945 atomic bombing, students prepare their own “peace declaration” and read it aloud in front of the children’s peace monument at the Hiroshima Peace Memorial Park.

The annual school trip became even more meaningful and important for the students after they themselves faced disaster in the 2011 Great East Japan Earthquake and tsunami.

“For high school students who have experienced the disaster in Iwate Prefecture, it is particularly important to think about and remember the event in which many lives were lost,” Tsukuta said.

This year, 233 second-year students were expecting to visit Hiroshima, Osaka, Kyoto and other places from Nov. 24 to Nov. 28.

However, in late September, they were notified by a travel agent that the area surrounding the peace park as well as the museum would be closed off for security reasons on Nov. 24 due to the first papal visit to Hiroshima in 38 years.

It was too late for the school to change the itinerary. Students had prepared for the trip for a year and a half, and they were folding 1,000 origami cranes to place at the children’s monument in Hiroshima when the news arrived, according to Tsukuta.

The principal wrote a letter to The Asahi Shimbun, pleading for a way to allow the children to visit the peace museum during the pope’s trip. The letter was published in the newspaper’s “voice from readers” section on Sept. 30.

“Young people who carry our future go all the way to Hiroshima and they are not even allowed to set foot in the park?!” Tsukuta asked. “I don’t think that’s the pope’s true intent at all.”

Many readers immediately responded to Tsukuta’s letter with gushing enthusiasm and strong support.

The high school received about 50 phone calls and letters in support of Tsukuta’s plea for finding a way to accommodate the students’ scheduled visit.

Several days later, officials of the Hiroshima city government contacted the school to say that the city was considering opening the museum for limited hours on the day of their planned visit.

Bishops of the Tokyo-based Catholic Bishops’ Conference of Japan learned about the letter and contacted Vatican officials.

The Vatican decided to invite the students from Iwate as special guests to the Nov. 24 main event where Pope Francis is scheduled to deliver his message from the Hiroshima Peace Memorial Park.

On Oct. 11, the official invitation to Tsukuta was delivered to the school.

Moved by the response, Tsukuta addressed the second-year students on Oct. 30.

“I want you all to keep thinking hard and trying to find the best way when you face something you can’t control,” he said. “I am sure that you will be connected to a wider circle of people and eventually open the way.”

The following day, The Asahi Shimbun’s “voice” section published another letter from Tsukuta that reported what had happened and expressed gratitude to Vatican and Hiroshima officials as well as people around the nation who had voiced their support.

NIGHT AT THE MUSEUM

Pope Francis is scheduled to visit Tokyo, Nagasaki and Hiroshima from Nov. 23 to 26.

His meeting for peace at the Hiroshima Peace Memorial Park is slated to start at 6:40 p.m. on Nov. 24. The pope is expected to arrive in Hiroshima earlier in the day and depart for Tokyo that night.

The Hiroshima city government on Nov. 5 announced that the museum will be closed from 1 p.m. to 8 p.m. on Nov. 24 for security reasons.

However, it will open from 8 p.m. until 10 p.m., hoping the special arrangement will accommodate people who had planned to visit the museum that day.

When U.S. President Barack Obama visited Hiroshima on May 27, 2016, the first by a sitting U.S. president, the museum closed at noon for security reasons.

The city did not make a special accommodation for visitors at that time.