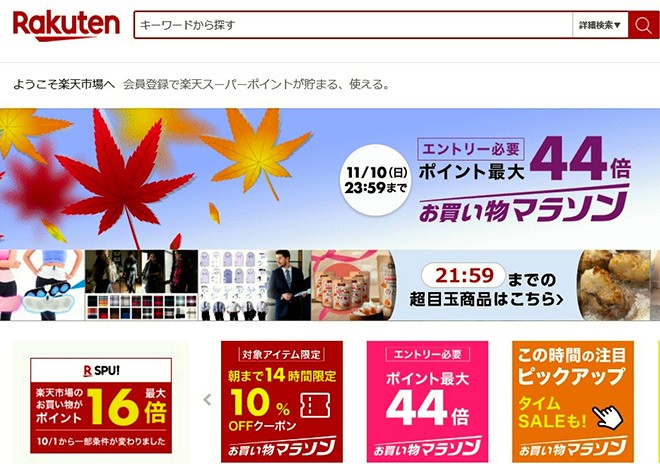 The website of Rakuten’s online shopping mall (Captured from Internet)

Online giant Rakuten Inc.’s new “free shipping” policy will surely be welcomed by customers using its Internet shopping mall, but it sparked a fierce backlash from sellers who fear financial ruin from the plan.

The sellers, after all, will be the ones who will have to cover the actual shipping costs under the “free” program scheduled to take effect next year. Some are banding together to seek collective bargaining with Rakuten over the policy.

“As a matter of logic, Rakuten should provide a free-of-worry environment for sellers,” another wrote.

Rakuten plans to start free shipping of all orders exceeding 3,980 yen ($36) starting in mid-March next year.

The outline of the policy was announced by Hiroshi Mikitani, chairman and CEO of the company, in January, and the 3,980-yen minimum purchase amount was set in August.

For shipping addresses in Okinawa Prefecture or remote islands, the minimum purchase amount for free shipping will be 9,800 yen, Rakuten said at the end of October.

The company told sellers on its online shopping mall that it would make them shoulder the burden of the actual shipping costs.

IN COMPETITION WITH AMAZON

Amazon Japan customers are basically guaranteed free shipping for orders of 2,000 yen or more when they choose a regular shipping method directly from Amazon Japan.

But at Rakuten, sellers independently set shipping fees for each item. Some sellers provide free shipping, while others do not.

The company said its website has received complaints from customers over the lack of coherence concerning shipping rates.

In addition, Rakuten officials said verification tests showed that a free-shipping service for a minimum purchase amount increased customers’ purchase amounts by about 15 percent, while also leading to a 14-percent gain in the number of new shoppers.

However, the company’s explanation has not won over the sellers on its site.

One seller said Rakuten is implying that they should tack on the shipping cost to the sales prices.

“I will have to add the shipping costs to the product prices, and the price increase will be 500 to 600 yen uniformly,” said Yuki Katsumata, 32, who sells tableware and stationery on the Rakuten site.

“Small-scale sellers cannot survive without passing on the shipping costs to the customers,” Katsumata said. “Once we get into a price competition, we are doomed to be beaten by major sellers.”

Katsumata and other sellers set up a voluntary association called “Rakuten Union” in mid-October.

Members plan to establish an official union based on the Small and Medium-Sized Enterprise Cooperatives Law to obtain the right to collective bargaining with Rakuten on the free shipping policy and other issues.

Yoshihito Kawakami, a lawyer who is advising the association, points out potential legal issues with Rakuten’s free shipping policy.

For example, if a seller tacks on the shipping costs to the product prices while advertising “free shipping,” the seller could be accused of “mislabeling,” he said.

Kawakami also said Rakuten could be in violation of antitrust laws if it forces the sellers to shoulder the shipping costs.

A Rakuten official told The Asahi Shimbun: “We have discussed our policies from various viewpoints and made efforts on legal compliance. We believe that providing customers with many more benefits will prove an asset to the sellers by increasing the number of customers and the frequency of their purchases.”