Hayabusa 2 to bid sayonara to Ryugu, start long trip back to Earth 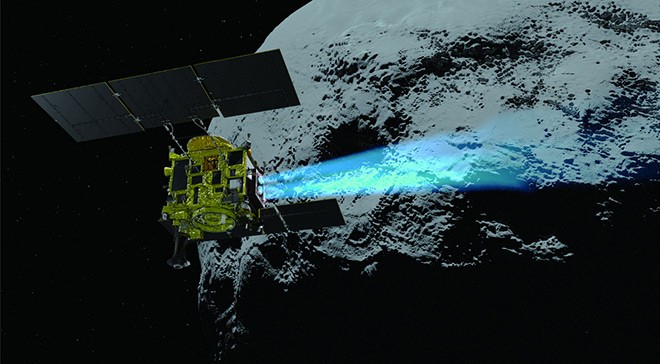 The return trip will take about a year, Hagiuda said at a news conference on Nov. 12.

Hayabusa 2, currently located about 20 km above the asteroid, will use its ion engine to move away from Ryugu and put it on a trajectory toward the sun, according to the plan of the Japan Aerospace Exploration Agency (JAXA).

The probe will make a three-fourths orbit around the sun, and the star’s gravity will fling the probe toward Earth.

By the end of 2020, Hayabusa 2 will be above Australia where it will release a capsule containing sand and rock samples from the asteroid, according to JAXA’s plan.

But the probe’s work will not end there. It is expected to immediately travel to another small asteroid.

Hayabusa 2 reached Ryugu in June 2018 and landed twice on the asteroid this year.

It dropped an explosive device on Ryugu, creating an artificial crater on the surface. The probe later fired a bullet around the crater, whipping up the sediments unearthed by the explosion.

The floating samples collected by the probe are believed to be the first underground ones taken from an asteroid.

In October, the probe dropped a small robot on the asteroid to end its Ryugu mission.