Takanawa Gateway Station on the Yamanote and Keihin-Tohoku lines was shown to the media on Nov. 16. (Reina Kitamura) 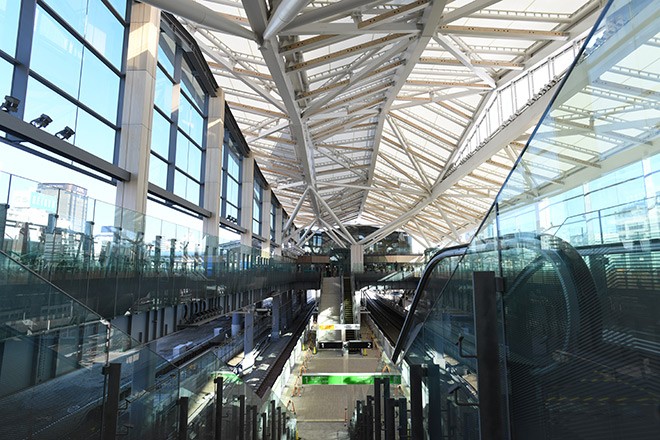 Takanawa Gateway Station on the Yamanote and Keihin-Tohoku lines is designed by architect Kengo Kuma and was inspired by origami works. The station in Tokyo’s Minato Ward was shown to the media on Nov. 16. (Reina Kitamura)

The first station set to open on East Japan Railway Co.’s (JR East) Yamanote and Keihin-Tohoku lines in Tokyo since 1971 sports a futuristic design that is distinctly Japanese.

The Takanawa Gateway Station is scheduled to greet its first passengers in spring 2020, in time for the Tokyo Olympics. Media representatives were given a preview of the construction site on Nov. 16.

The last new station to be opened on the Yamanote Line was at Nishi-Nippori 48 years ago. It is the first time for a JR East station in Tokyo to use katataka characters in the name.

The station is located in Tokyo’s Minato Ward between Tamachi and Shinagawa stations. JR East has been working on redeveloping a 13-hectare site that previously served as rail yards. It is promoting the new station as a central hub for redevelopment.

The three-story, 30-meter tall station building is almost completed. Wood-effect tiles and panels feature in the interior of the second-floor concourse and first-floor platform.

The center of the station has an atrium structure. The 110-meter-long roof above the platform was inspired by origami works. The doors and the station's name are already installed.

On Nov. 16, a portion of the Yamanote and Keihin-Tohoku lines was suspended from the first train in the morning due to construction work.

During the 2020 Olympics, live screenings of sports events are scheduled at an open space in front of the station.