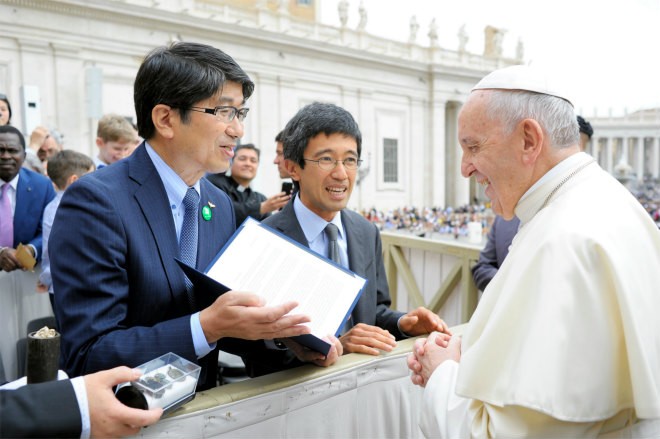 Roman Catholics and atomic bomb survivors in Japan are fervently hoping the first papal visit in nearly 40 years will help trigger a sharp shift in thinking by the nuclear powers.

Francis, 82, will be the second pope to visit Japan after Pope John Paul II in 1981. He is scheduled to go to Nagasaki and Hiroshima on Nov. 24.

Hibakusha, mindful of the interest Francis has shown in the weapons' issue, harbor high expectations that he will deliver such a strong message that the United States, in particular, takes note.

In late 2017, the Vatican distributed a card to church officials around the world with a photograph titled "The boy standing by the crematory" showing a young boy waiting in line at an outdoor makeshift crematorium with the body of his younger brother, a victim of the atomic bombing, strapped to his back.

Francis included a message with the card that said the photo demonstrated "the fruit of war."

The image was taken by Joe O'Donnell, a U.S. military photographer, when he visited Nagasaki after the city's Aug. 9, 1945, atomic bombing. Numerous efforts have been made over the years to identify the youngster in the photograph.

According to Cardinal Manyo Maeda, 70, himself a second-generation hibakusha, Francis was clearly shaken by the photo, saying children should never experience such horrors.

Francis believes the church should serve as a field hospital and has pushed efforts to help the disadvantaged by providing support to refugees as well as working to eliminate poverty.

Mitsugi Moriguchi, 83, who survived the atomic bombing of Nagasaki, befriended O'Donnell during his visits to Japan to uncover the identity of the boy in the photo. He argued about the inhumane nature of nuclear weapons for the rest of his life, even as he suffered from severe spinal cord pain believed to be an after-effect of radiation exposure.

But Moriguchi is also aware that not all Americans share O'Donnell's sentiment.

Moriguchi was shocked when he visited Richland High School in Washington state last year and found that the symbol for the school was a mushroom cloud. The school is located next to Hanford Site, a former nuclear facility that produced the plutonium used for the bomb dropped on Nagasaki.

He was shocked because the students had not learned about the devastation the bomb wrought.

The prevailing view in the United States is that the atomic bombings brought an early end to World War II and saved countless American lives.

Moriguchi was struck by the dearth of knowledge in the United States about the horrors of nuclear warfare and lack of interest in the victims, such as the young boy in the photograph.

Moriguchi will be among those welcoming Francis to Nagasaki. He hopes the pontiff will deliver a strong message to the world calling for the abolition of nuclear weapons.

Francis is scheduled to deliver that message at Nagasaki Peace Park on Nov. 24. He will later offer Mass at the Nagasaki Baseball Stadium, and journey the same day to Hiroshima Peace Memorial Park.

According to Maeda, Francis regards the production and use of nuclear weapons as immoral, and is likely to include that sentiment in his Nagasaki peace message.

WHAT POPES HAVE SAID

Francis is not the first pontiff to take a strong stance against nuclear weapons.

Christopher Hrynkow, an associate professor of religion and culture at St. Thomas More College of the University of Saskatchewan in Canada, has studied what popes have said and written about nuclear weapons since the time of Pius XII.

When John Paul II visited Japan in 1981, he called for the elimination of nuclear weapons when he visited Hiroshima and called war the "work of man."

His comment is said to have deeply moved many Catholic worshipers.

The atomic bombing of Nagasaki destroyed Urakami Cathedral, then the largest cathedral in the Far East. An estimated 8,500 Catholics perished in the bombing.

Takashi Nagai, a hibakusha doctor who headed the members at Urakami and whose wife died in the blast, referred to the atomic bomb as "divine providence," given the horrific death toll.

About 140,000 people died in Hiroshima before the year was out. The figure for Nagasaki was 74,000 people. The death toll from burns and other injuries kept rising in the years that followed.

Nagai later wrote "Nagasaki no Kane" (The Bells of Nagasaki), in which he called Urakami's destruction a sacrifice to God.

The General Headquarters of the Supreme Commander for the Allied Powers (GHQ) immediately clamped down on any reporting about the after-effects of the atomic bombs, and only allowed Nagai's work to be published if it was done in conjunction with a document compiled by GHQ that described atrocities committed by the Imperial Japanese Army in Manila.

After John Paul II's revelation that war was the work of man, many Catholic hibakusha began opening up about their own experiences. Much of this was due to the late Tsuyo Kataoka, herself a hibakusha, who said, "The atomic bomb was not the work of God."

Mitsuaki Takami, the archbishop of Nagasaki, was a fetus when the bomb was dropped.

"Nagai may have tried to absolve the United States by saying it was divine providence, but the bombing can never be legitimized," Takami said. "There has been no atonement."

Born in Argentina, Francis is the first pope from the Southern Hemisphere. As head of the Vatican, an independent city-state, he led the process to become the first state to ratify the U.N. Treaty on the Prohibition of Nuclear Weapons on Sept. 20, 2017.

A 59-year-old father who studied under Francis at a divinity school in Argentina in the 1980s, said, "In Argentina, doubts were held about the Treaty on the Non-Proliferation of Nuclear Weapons since it allowed the five nuclear powers of the Northern Hemisphere to not only monopolize nuclear weapons, but also continue developing new ones."

Criticism about the monopolization of nuclear weapons was also touched upon in the Laudato si, or Encyclical Letter, issued in 2015 under Francis' name. In the document, Francis called for resolving global environmental issues.

It came at a time when there was a worldwide hunger for a more humanitarian approach to resolving issues of national security and focusing more on protecting individuals rather than states.

That trend was triggered by a change from Cold War ideology based on deterrence to one about the North-South divide in which only nations in the Northern Hemisphere possessed nuclear weapons.

The movement for the nuclear weapons ban treaty was pushed by nations such as Mexico that feared another Cuban missile crisis that brought the United States and the former Soviet Union to the brink of nuclear war.

Many of the 122 nations that voted for the treaty in 2017 were developing nations in Africa as well as island nations in the Pacific where nuclear tests were conducted by the United States, Britain and France.

But in addition to the nuclear powers, nations such as Japan and South Korea that are protected by the U.S. nuclear umbrella have balked at approving the treaty.

Nations that pushed for the treaty are hoping that Francis' visit to Japan will provide momentum to encourage other nations to sign and ratify the treaty.

There are about 440,000 Catholics in Japan and about 1.3 billion around the world.

A main theme of the pope's visit will be to protect the lives of all people.

Takami said, "His message from Nagasaki will have a huge impact."

I visited the National Museum of the U.S. Air Force near Dayton, Ohio, in July. One of the aircraft on display was the B-29 Bockscar that dropped the atomic bomb on Nagasaki. A nearby sign described the aircraft as having brought World War II to an end.

The aim of the display seemed intended to perpetuate the myth in the United States about the invincible strength of nuclear weapons and the general acceptance there that the bombings saved numerous American lives by bringing the war to an early end.

But not all Americans are comfortable with that view.

The late Walter Hooke, a U.S. Marine who was presented with a cross from the ruins of Urakami Cathedral when he was assigned to Nagasaki in 1945, was haunted until the end of his days by the destruction and misery caused by the atomic bombing.

According to his son, Hooke was bothered "that a Christian country bombed a cathedral" and felt "there was absolutely no strategic value in the bombing of Nagasaki."

Hooke was later involved in finding support for veterans whose health deteriorated due to radiation exposure while in Hiroshima and Nagasaki.

According to documents at the Truman Library in Independence, Missouri, Harry Truman never expressed regret for having authorized the atomic bombings. But in private correspondence, Truman wrote about the chagrin he felt when he thought about the many women and children who died as a result of his decision.

Close associates confided in diary entries that Washington was concerned about how the bombings would affect relations with the Vatican.

The United States at that time did not have diplomatic ties with the Vatican, and U.S. officials may well have been concerned about the negative impact that was bound to result from the destruction of Urakami Cathedral.

Francis has taken a stand against nuclear weapons on a number of occasions, and clearly rejected the theory of nuclear deterrence. His statements seem to reflect his growing sense of crisis at the prospect of another Cold War in light of recent moves by the Trump administration.

For example, it has ignored provisions of the NPT calling for sincere negotiation efforts to reduce the number of nuclear weapons and earlier this year invalidated the Intermediate-Range Nuclear Forces treaty with Russia. It is now pushing ahead with development of low-yield nuclear weapons.

When Francis visits Nagasaki, he almost certainly will be shown the cross and Virgin Mary statue that survived the atomic bombing. The cross was returned to Urakami Cathedral this summer.

The message that Francis delivers could be instrumental in pushing the United States to abandon its mantra about the invincibility of nuclear weapons, and may also convince Japan to reconsider its dependence on the U.S. nuclear umbrella.