EDITORIAL: Having Abe at helm has done more harm than good to Japan 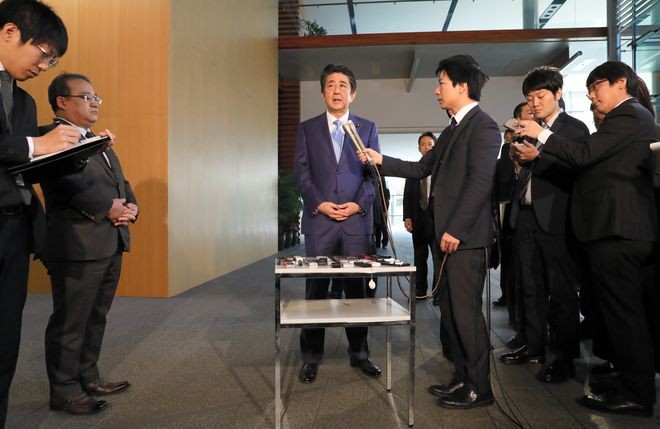 There is now no doubt that Prime Minister Shinzo Abe will be remembered as Japan's longest-serving head of government.

Yet, we cannot credit his administration with having achieved anything of historic significance commensurate with its impressive longevity. Nor can we deny that the longer Abe stayed in power, the more conspicuous his administration's shortcomings became.

Abe became prime minister in September 2006, but he only lasted barely a year. His second administration was inaugurated in December 2012.

During the past seven years, the ruling Liberal Democratic Party and its junior coalition partner, Komeito, have won six consecutive Diet elections.

From 2006, Japan had six prime ministers come and go in as many years. After the Democratic Party of Japan gained power in 2009, the initial public excitement over this much-awaited change of government soon changed to bitter disillusionment over the DPJ's apparent inability to govern. Voters began to miss political stability, rendering the ruling coalition invincible in national elections from 2012.

Under the second Abe administration, stock prices did continue to rise, thanks to Abe's "Abenomics" economic policy, leading to higher corporate profits and improved employment numbers. However, wages have not risen, and the public at large has barely felt any real economic benefits.

We cannot say that the Abe administration has taken advantage of its stable political footing to tackle social problems head-on, such as those related to the nation's low birthrate coupled with the inexorable aging of the population.

With regard to personal relations Abe has formed with world leaders through his years in office, we do not know if any has contributed to specific achievements of significance.

On the other hand, negative consequences of Abe's long rule are much easier to point out.

The so-called political reforms of the Heisei Era (1989-2019) precipitated the concentration of power in the hands of political party leaders, and in the prime minister himself where government affairs were concerned.

Free, active debate died out within the LDP, and "sontaku" (pre-emptive acts to ingratiate oneself to one's superiors) came to be widely practiced by bureaucrats. A typical example of that was the falsification and destruction of official documents by the Finance Ministry in the Moritomo scandal.

This scandal, as well as the Kake scandal, raised grave suspicions that individuals close to the prime minister received special treatment. This seriously damaged the public's trust in the notion of political fairness and integrity.

The more recent case of Abe's supporters being invited to tax-funded "cherry blossom viewing parties" share the same root as the Moritomo and Kake scandals.

While openly playing favorites, the prime minister has rudely scorned people whose opinions are different from his, and treated them as "enemies." His attitude encourages mean-spirited divisiveness in society.

And last but not least, his administration is like none other in its blatant disrespect for the spirit of the Japanese Constitution. Abe arbitrarily scrapped the traditional constitutional interpretation of all past administrations, and opened the doors to the partial exercise of Japan's right to collective self-defense. And he simply ignored every call for an extraordinary session of the Diet, made by opposition parties in full compliance with the Constitution.

There are two years remaining in Abe's tenure as LDP president. Should he dare, out of some personal principle or conviction, try to force constitutional amendment as his "legacy," he will only invite political confusion.

He definitely needs to think about how best to make use of the limited time left.

What do the Japanese people expect of politics now, and what are the issues his administration must address without delay? He must get his priorities straight and act.