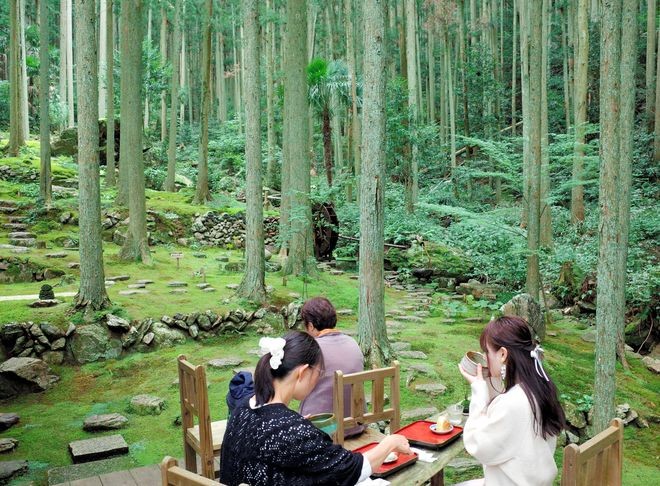 Seated on the terrace, guests enjoy a mesmerizing view of the moss garden at the Kokemushiro cafe in the Uwacho district of Seiyo, Ehime Prefecture, on Sept. 26. (Kota Fujii)

SEIYO, Ehime Prefecture--On any given day, droves of tourists can be seen walking along a forested national road toward a secluded area here.

But they haven't come to hike or trek. They're all headed to the same destination: a cafe called Kokemushiro, famous for its sprawling, moss-covered garden and extraordinary view.

It looks even more ethereal when the sunlight comes streaming through the trees, vividly illuminating the green moss field.

The cafe stands in the middle of cedar and cypress trees, its 2,248-square-meter premises tucked into surroundings covered with lush moss.

Ten varieties of moss grow around the cafe.

“That doesn’t mean I’ve always liked moss. I’ve put so much effort into it, but not so much money,” said Kokemushiro's owner, Yasuyoshi Murakami, 70, with a chuckle.

Murakami retired from his job at a company connected to the auto industry after his children started working.

He then managed an inn in an old house at the base of a mountain, accepting guests by reservation only.

Complete with a pond in the garden and surrounded by flowers and moss, the inn earned a positive reputation among guests for its relaxed ambience.

Murakami learned from a regular patron that the sight of moss spreading across the place is known as “kokemushiro” (moss matting).

To create a moss-covered environment, Murakami decided to expand the premises further into the terraced rice paddies above the inn. He went on to collect moss from the mountain day after day.

He spent the next five years or so thinning a part of the forest that had covered the terraced paddies to wither grass and carpeting the area with moss. He did all the work himself.

He set up a wooden building there to open Kokemushiro in 2005. The cafe became popular several years later after being featured on a TV show.

Patrons can take in the view of the moss garden from the terrace as they drink coffee or take a stroll around the grounds.

“This is my third time here. I’m a big fan,” said Tomoko Hino, 48, who came with her parents from Saijo, Ehime Prefecture. “The moss and the trees change their colors with the seasons.”

“I’m amazed to see so many people taking the trouble of coming all the way to the countryside to see it,” Murakami said.

But he's still absorbed in coming up with ideas to attract visitors.

Murakami also often spends all day collecting branches and leaves of cedar and cypress trees constantly falling all around the place. He also has to mend moss trampled by children.

Murakami said the best time to view the moss is after a rain shower. “The moss sparkles when the light shines through it, and it’s beautiful,” he added.

Kokemushiro is located at 2099 Uwacho-Nobusato, Seiyo, Ehime Prefecture, and open from 10 a.m. to 5 p.m. The cafe is closed on Mondays from April to December, and open only on weekends and holidays from January to March. A 100-yen entrance fee (90 U.S. cents) is required to cover the cost of maintaining the moss.