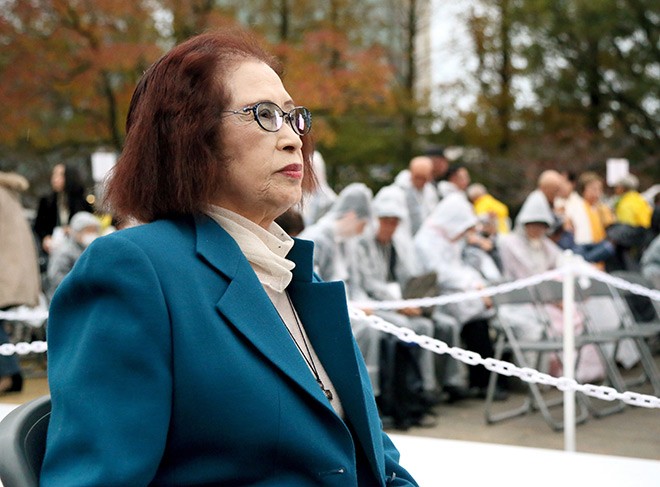 Sachiko Matsuo attends the pope’s speech at a ceremony held in the Atomic Bomb Hypocenter Park in Nagasaki on Nov. 24. (Toshiyuki Hayashi)

Sachiko Matsuo and Yoshiko Kajimoto are now in the twilight of their long lives marked by the pursuit of pacifism and haunting memories of the horrors of nuclear warfare.

But the words of Pope Francis, who called for a “world of peace, free from nuclear weapons,” have given these two survivors of the 1945 atomic bombings of Nagasaki and Hiroshima additional strength to continue their quest for “no more” tragedies from nuclear weapons.

“Our response to the threat of nuclear weapons must be joint and concerted,” he said in his message delivered at ground zero in Nagasaki.

Matsuo was a child when she witnessed the destruction spreading from that site on Aug. 9, 1945. The nuclear blast also destroyed a symbol of the long struggle endured by generations of Matsuo’s family.

In the Urakami area of Nagasaki city, where Matsuo was born, more than 3,000 Christian residents were exiled to the Chugoku region and elsewhere in 1867. The Tokugawa Shogunate (1603-1867) banned the religion in 1612.

More than 500 people died in the exile, but Matsuo’s grandmother, Waki, who was born a year before the crackdown began, survived.

Waki and others who returned home made every effort to build Urakami Cathedral without relinquishing their religious belief. The cathedral was completed in 1925, 30 years after they started the construction.

However, the cathedral was destroyed by the atomic bomb two decades later.

Matsuo and Waki had taken refuge on a mountain from U.S. air raids when the nuclear blast occurred. They both cried as they watched the destruction unfold in the city, including the cathedral.

About 20 years ago, Matsuo started her activities as a “kataribe,” people who share their war experiences publicly.

Her older sister died after being crushed under her collapsed house about 700 meters from ground zero.

Her father died on Aug. 28 that year after spots appeared on his body. Matsuo lost 20 relatives from the atomic bombing.

She shared her experiences with the public about twice a week in autumn, but with her physical strength weakening, she started thinking about giving up her activities as a kataribe by the end of this year.

When she learned that the pope would visit Japan, Matsuo decided to see him in person in appreciation for her grandmother, who had worked so hard to protect the religion for future generations.

Matsuo has continued her activities to seek a world free of nuclear weapons, believing that words alone cannot change the situation.

Then she saw that the pope shared her wish.

“I think he sent a message to younger generations to cheer themselves up and keep going,” Matsuo said. “I’ll keep telling my stories as a kataribe.”

Kajimoto, 88, who lives in Hiroshima’s Nishi Ward, stood in front of a microphone and spoke about her wartime experiences on Nov. 24 with Pope Francis in attendance.

“I’m confident that nuclear weapons will be destroyed by the power of many people who are wishing for peace and the souls of those who died after the bombing,” Kajimoto said at Peace Memorial Park in Hiroshima, as the pope listened intently.

Kajimoto had been mobilized as a student worker at the end of World War II when she was crushed under a factory building after the atomic bomb detonated over Hiroshima on Aug. 6, 1945.

She saw people running in all directions with inescapable burns all over their bodies following the fireball from the blast.

Kajimoto’s father died a year and a half later after vomiting blood, and her mother suffered from the effects of the blast for 20 years before her death.

Although this year marks 74 years since the atomic bomb was dropped in Hiroshima, there are still victims who suffer from leukemia and other cancers.

In her speech, Kajimoto made an appeal to the audience: “Nuclear weapons should not exist on this planet. We should not let children or anyone in this world have this same suffering.”

Kajimoto said she was encouraged by the pope’s message for peace at the park as well as his strong condemnation of the atomic bombing.

She said she hopes the pope’s visit to Japan will provide an opportunity for people around the world to learn about the realities of the horrors caused by the atomic bombings.