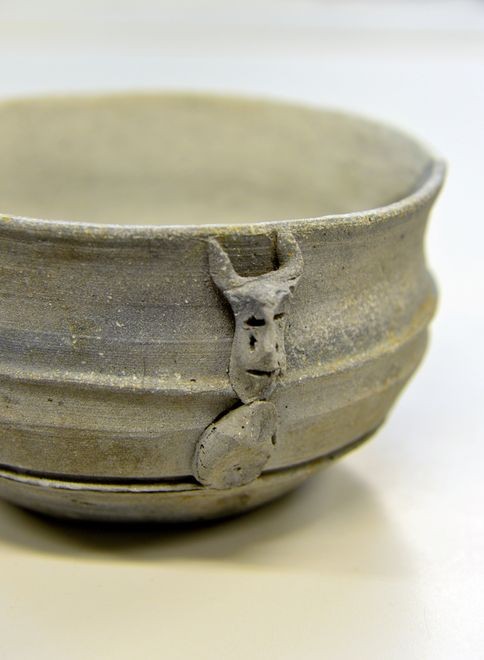 Archaeologists expect the cup to provide important clues to Japan's religious customs of the time, as a similar design has been found on ancient murals in China and the Korean Peninsula.

“The face (on the cup) is highly likely to represent cattle, though it was painted to resemble a human's,” said Hideo Minami, a senior official of the Osaka City Cultural Properties Association. “It's also interesting that the face adorns an ordinary vessel apparently used in daily life.”

The cup will be displayed at a special exhibition in the Osaka Museum of History through Jan. 6 next year.

The association conducted an excavation from July to August last year on land that had been surveyed in preparation for the construction of an apartment.

A settlement that existed between the Yayoi Pottery Culture period (300 B.C.-A.D. 300) and the Kofun Period (third century to seventh century) was located at the site.

Excavators at the site found the “sueki” earthen cup with a 10-centimeter diameter, in pieces. The face, measuring 2.7 cm, was on the base of its chipped handle.

Two horns extend from its swollen forehead. While its nose appears to have been created with fingers, the eyes, mouth and nostril were likely drawn with a sharp tool.

According to the association, sueki bearing such a design were actively created in Japan during the sixth century, but it is highly uncommon to unearth one from the mid-fifth century.

Minami said the face resembles Taoist demon gods that had faces of beasts often found on murals in burial mounds in Goguryeo, which ruled an area from northeastern China to the northern Korean Peninsula around that time.

He noted that religious philosophy from China could have been introduced to Japan at the same time as horses, cattle and their breeding techniques were imported from the Korean Peninsula in the fifth century.

“Philosophies and religions from the continent may have spread on the Japanese archipelago to some extent in as early as the fifth century,” Minami said.

Philippine lawmakers deny license to broadcaster at odds with Duterte