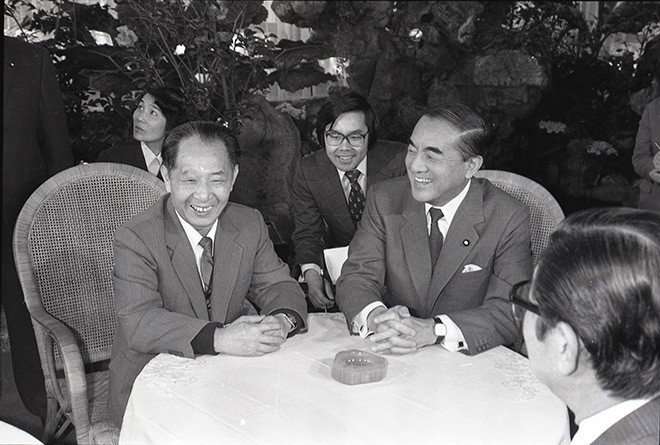 The late Yasuhiro Nakasone was hailed by media in South Korea and China for his efforts to improve bilateral ties, although they pointedly noted he was the first postwar Japanese prime minister to make an official visit to Yasukuni Shrine in Tokyo.

Nakasone, a giant of postwar politics, died in Tokyo on Nov. 29 at the age of 101. His death received wide media coverage overseas.

South Korea's Yonhap News Agency described Nakasone as "the top figure" among Japan's right-wing political elements, and went on to note that he opened the door for Japanese politicians to visit Yasukuni Shrine, which memorializes the nation's war dead along with 14 Class-A war criminals.

Nakasone's official visit to the Shinto shrine in Tokyo in 1985 triggered an outcry in South Korea and China, prompting him to refrain from more visits while he was prime minister.

The Chosun Ilbo, a conservative South Korean daily, described Nakasone as the Japanese politican "most knowledgeable about South Korea." The paper noted that he became the first prime minister in the postwar era to visit South Korea in 1983 and recalled a gathering with South Korean President Chun Doo-hwan in which Nakasone sang a popular song in Korean.

The JoongAng Ilbo daily's report also touched upon the 1983 visit, recalling that when Nakasone spoke at a dinner reception in his honor one-third of the speech was in Korean.

The article went on to say that Nakasone was known for his efforts to study the Korean language. He would listen to cassette tapes to learn Korean even while taking a bath and he often took out small cards from his suit pocket to study the Korean words printed on them.

At a Nov. 29 news conference in Beijing, Geng Shuang, a Chinese Foreign Ministry spokesman, said of Nakasone, "He was very earnest about friendship and cooperation toward China and made an important contribution to developing China-Japan ties."

The Yasukuni visit by Nakasone, as well as disputes during the 1980s about how Japanese history textbooks dealt with the wartime period, often led to international criticism, but Japan's ties with China remained generally favorable largely due to the close personal relationship Nakasone developed with General Secretary Hu Yaobang.

The New York Times also touched upon Nakasone's relationship with U.S. President Ronald Reagan and described Nakasone as "one of the few Japanese leaders to win recognition on the world stage."

(This article was written by Takeshi Kamiya in Seoul and Takashi Funakoshi in Beijing.)