From TV spots to mystery dramas, Ibaraki is a big draw for filming 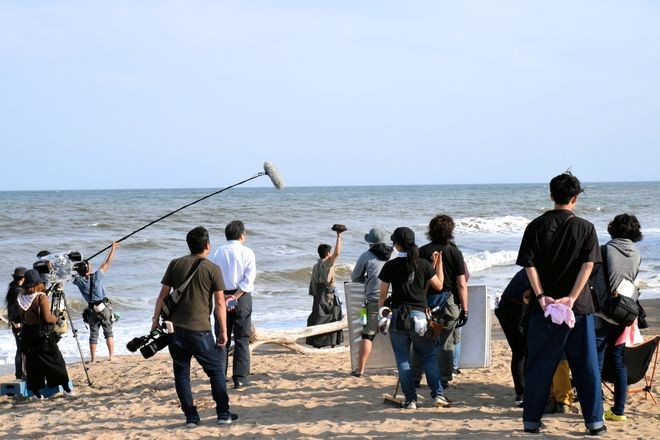 Location filming at a beach in Hitachi, Ibaraki Prefecture, in May 2018 (Provided by the Ibaraki prefectural government)

A record 606 works, including films and TV dramas, were shot in the prefecture in fiscal 2018, up 15 percent from the previous fiscal year, according to the Ibaraki prefectural government.

All of the projects were made through film commissions.

Those of the Ibaraki prefectural and municipal governments supported 65 films, 109 TV dramas, 192 infotainment TV programs and 240 commercials and music videos in the fiscal year, with a total of 1,318 days spent at the locations.

The number of works and filming days marked a record since 2002 when the prefecture set up a film commission promotion office.

According to the prefecture, location filming is proving to be an economic windfall.

Money spent during the projects, such as hotels, catering and other film crew costs, generated an estimated 330 million yen ($3.1 million). If the ripple effect of personal spending by people associated with the filming is taken into account, the total is thought to hover around 450 million yen.

However, the economic effect is limited to a certain extent, as filming is often completed in a single day by crews to cut production costs.

The most popular filming location in Ibaraki was a quarry in Hitachiomiya for scenes featuring explosions.

Number two was the Tsukuba naval air corps museum in Kasama, which was used as a military facility in war films and as a police station in mystery TV dramas. The former headquarters building of the Imperial Japanese Navy's Tsukuba aviation was turned into the museum.

Other popular sites include Oarai Sun Beach in Oarai, and the Ashiyama water purification plant in Mito for the smash-hit horror film "One Cut of the Dead."

The prefectural government building area has also proven to be a draw, with one official saying: "The road in the area of the government building is convenient because it looks like any public road. Filming for 'Masked Rider' and a car commercial were done here."

Explaining why Ibaraki has become so popular, Seiki Haginoya, a section chief of the prefectural film commission promotion office, said: “Ibaraki has mountains and sea. The landscape here could be anywhere in Japan, from Hokkaido through Okinawa Prefecture.”

Production teams can also easily obtain police permission, in tandem with the local film commission promotion office, to film on roads for closed sets. And as Ibaraki is not far from the Tokyo metropolitan area, filming can be completed and the crew can return home the same day in many cases.

However, despite so much filming, some are concerned the prefecture's charms are not being promoted and that the filming will have a modest impact on tourism.

"I think it's problematic that Ibaraki's uniqueness does not appear on the screen," Haginoya said.

For this reason, the prefectural government implemented a project in fiscal 2018 to shoulder some of the production costs for films staged in the prefecture.

“Arumachi no Takai Entotsu" (A tall chimney in a town) set in Hitachi was chosen for the project and granted 10 million yen in funding.

“We do not necessarily aim to increase location filming here,” Haginoya said. “We want to put more efforts into attracting location filming for movies and TV dramas staged in Ibaraki, such as 'Kamikaze Girls’ set in Shimotsuma.”

Japan’s Locked Borders Shake the Trust of Its Foreign Workers