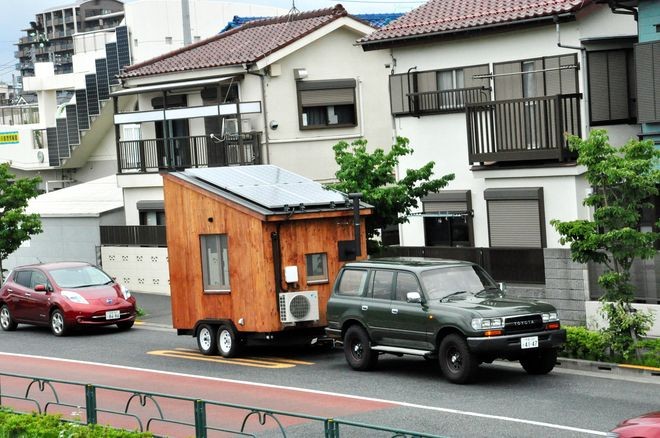 If disaster strikes and the power grid shuts down, a mobile home developed here that produces electricity would be a pretty lucky place to be.

Equipped with a solar power generator, battery and air conditioner, the home covers all the power its occupants consume using a 1-kilowatt photovoltaic panel on the roof during the day, and a 5-kilowatt lead battery at night and on rainy days.

A sign over the front door of the home, which resembles a wood cottage, reads "Enekoya," meaning “energy hut” in Japanese.

A citizens group here of the same name came up with the off-grid house in response to the 2011 disaster at the Fukushima No. 1 nuclear power plant.

The group, headed by first-class licensed architect Tsuyoshi Yuasa, 54, formed with the aim to spread use of homes that could run on renewable energy.

The 7.3-square-meter caravan doesn't need to be connected to an external power source and can be hooked up to a vehicle for towing.

The main components of the house are cedar from Tokyo’s Tama region. The window frames and insulation were also produced domestically.

The interior comes outfitted with a kitchen, air conditioner and a stove for heating that burns wood pellets, making it habitable in summer and winter.

Part of the trailer’s 3.5 million yen ($33,100) construction costs were covered through an online crowdfunding campaign.

Within a month and a half, it raised 1.26 million yen from contributions by 131 people, Enekoya said.

Many volunteers lent a hand to build the house, which sits on a chassis. During four workshops in April, a total of 200 people helped to lay its floor, assemble its walls and roof, and paint it.

Enekoya developed its first off-grid building in 2016 next to Yuasa’s home in Chofu, western Tokyo, for use as an architectural office.

Although many experts and other interested people have visited the office, most people have no opportunity to see an off-grid building.

To introduce more people to the unique dwellings, Enekoya decided to make a power-generating mobile home that could travel from place to place.

One day in early July, Yuasa drew cries of surprise from people along the road who saw him towing the mobile home to an event in Chofu.

"Whoa! The house is moving!" someone shouted.

Many adults and children turned out to view it at the event.

“It can do more than you might expect,” Yuasa said, as he demonstrated the home's appliances, including a water cooler and fridge.

The house also has regular electrical sockets so computers or TVs can be used.

The day was overcast but the trailer-mounted battery remained almost fully charged during the event.

Many visitors commented that the mobile home had “a nice wood smell,” since natural resources were used to paint it, creating a refreshing forest-like ambience.

The traveling Enekoya residence has proven so popular that it secured spots at many events during the summer holidays, including ones organized for kids.

“We hope people enjoy the events. We will work to inspire them to learn about climate change and energy and take action,” said Yuasa.

Yuasa also said he hopes the mobile home will be used in elementary, junior and senior high schools to teach children about the environment.

Okayama-based group Jienegumi, which consists of people who generate electricity by themselves, said 18 off-grid residences, including the one by Enekoya, have been introduced since they started in 2013.

Enekoya co-leader Shokan Otsuka, who heads Jienegumi said, “More than 90 percent of energy can easily be covered whereas it is difficult to make a house 100 percent self-sufficient.”

If secondhand lithium-ion batteries for use in electric vehicles become cheaper, off-grid houses may become much more common in the future, Jienegumi members said.

Project seeks to issue certificates to travelers to verify virus-free