A Kyoto-based artisan developed a bicycle bell made from an “orin” Buddhist bell. (Seiji Tanaka) 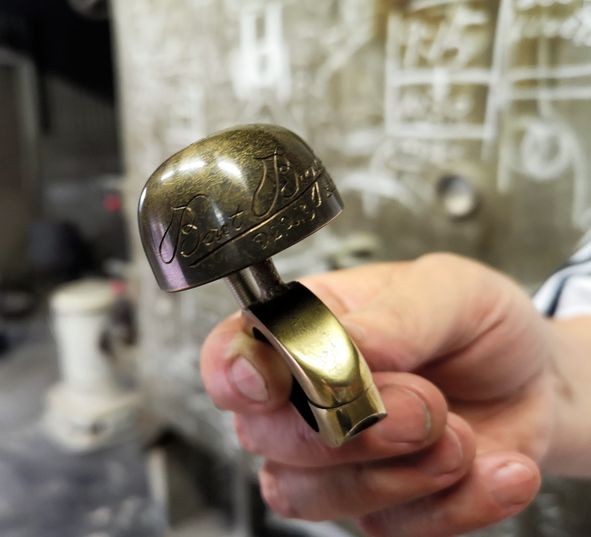 A bicycle bell made with techniques for making "orin" Buddhist bells are produced at Rinyo Kobo Ltd. in Kyoto. (Seiji Tanaka)

KYOTO--“Orin” bells used at Buddhist altars and rung to drive out the prayer's evil thoughts are characterized by their comforting timbre.

Wouldn't one be great for a bicycle bell?

When an engineer approached Katsuaki Shirai, 61, to turn an orin bell into one, the percussive instruments specialist thought he was joking.

Junichiro Kadono, 59, and Shirai first crossed paths at the Kyoto Municipal Institute of Industrial Technology and Culture in 2011.

Shirai was there to analyze the metallic composition of an old “kane” gong in order to make a new one for Kyoto’s Gion Festival.

When he introduced himself saying that he was making Buddhist bells, Kadono popped the question about making an orin bike bell.

Kadono, it turned out, was a cycling enthusiast and wanted a bell that could resonate far and long like Buddhist musical instruments.

Shirai wasn't totally unaccustomed to this kind of reaction from people who found out he made percussive instruments. His studio was once asked to make bells for an alarm clock.

But he didn't expect Kadono to follow up on the idea.

However, he found himself swept up by the engineer’s enthusiasm when Kadono came through with a “prototype” of an orin attached to a box, and he agreed to work on the project.

But the prototype didn’t ring well.

“Experience has shown me they resonate better when you hit them from a slight angle, rather than at a full 90-degree angle from the side,” Shirai said.

The artisan went on to tinker with the structure while he determined the design.

There was one idea to make a bell attached to a cushion, but Shirai opted for a design that left no screwhead exposed on top. He also decided to use a hammer made of ebony to ring the bell, just like the “rinbo” striker used for orin.

Shirai's concept was to make the bell in a such a way that its sound is amplified by the entire frame of the bicycle. He said one fun thing about the production process was ringing various orin bells to see how they sounded.

“(The bell) lets people know a bike is coming, since it makes a clear, resonating sound. I wanted to make one that when you ring it, wouldn’t make people feel unpleasant,” Shirai said.

The artisan's Shirai Bell is being produced on a made-to-order basis. Two types of bicycle bell are available, one for 30,000 yen ($283) and another for 50,000 yen. Extra costs apply for metalworking and painting.