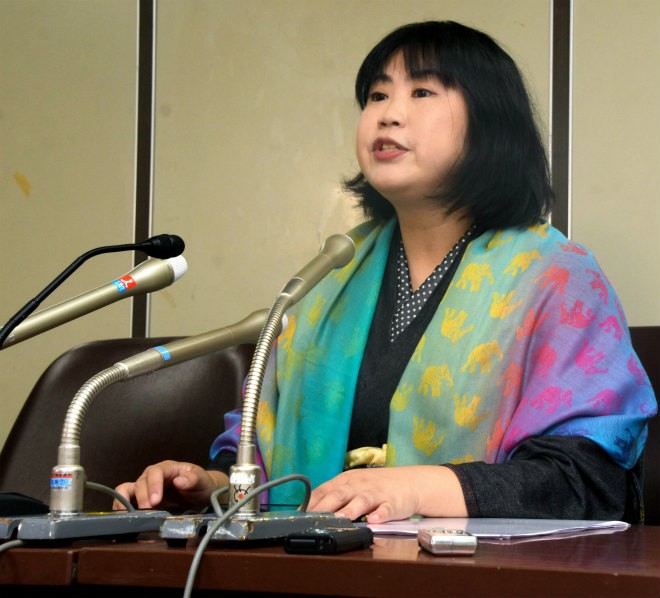 Lawyer Remi Shiraki who represents a woman who sued the lover of her lesbian partner, talks at a news conference in Tokyo’s Chiyoda Ward on Sept. 18. (Takumi Wakai)

MOKA, Tochigi Prefecture--A Sept. 18 court ruling here in an adultery case apparently recognized a same-sex couple as being married under common-law for the first time in Japan.

The Moka branch of the Utsunomiya District Court awarded 1.1 million yen ($10,200) to the plaintiff, who filed a lawsuit against her female partner and her lover.

At the heart of the case was the issue of whether the plaintiff, as a person in a same-sex relationship, which are not recognized as marriages in Japan, was legally entitled to sue for damages.

Judge Yosuke Nakahata, in his ruling, said: “(A plaintiff) is entitled to have legal protection similar to that of (heterosexual) common-law couples if they are truly a couple.”

The plaintiff, who is in her 30s, and her partner were legally married in the United States and had lived together in Japan.

“Our relationship was destroyed due to my partner’s act of infidelity,” the plaintiff said.

She had sought 6.4 million yen in compensation from her partner and the person with whom she had an affair.

The court's ruling cited a description of Article 24 of the Constitution that states, "Marriage shall be based only on the mutual consent of both sexes.”

The court decision is based on a dissenting view from the government’s interpretation “Article 24 of the Constitution does not assume same-sex marriages.”

The relationship of heterosexual couples who have not filed marriage papers was clearly described as a “relationship similar to that of marriage” in a Supreme Court decision handed down in 1958.

Individuals in common-law marriages are able to seek compensation in cases of adultery based on that court precedent.

Whether the precedent could be applied as well to a same-sex couple was the main focus of the legal debate at the trial.

Nakahata pointed out in the ruling that the social sense of values and people’s lifestyles have become more diverse, saying, “It is hard to declare that the marriage relationship should be restricted to a man and woman.”

He also cited recent situations where some local governments have officially certified same-sex couples as couples, saying, “There is an urgent necessity to grant a certain level of protection to same-sex couples.”

In the ruling, the couple was recognized as a couple with “a living condition that indicates their de-facto marriage relationship” based on the fact they had lived together for about seven years, and got married in the United States.

Nakahata also said the amount of compensation was limited to 1.1 million yen “because there still is a gap between legally married (heterosexual) couples, or common-law couples, and same-sex couples.”

The plaintiff and her partner started their relationship in 2009 and had been living together since 2010. They obtained a marriage certificate in 2014 in the United States, according to the ruling.

The plaintiff's partner, who wished to have a baby, found a sperm donor through a social networking site and was artificially inseminated.

After the plaintiff discovered her partner had cheated on her with the donor, thereby ending the relationship, she decided to take legal action.

“The biggest thing is that it was recognized that the relationship of a same-sex couple is similar to that of (heterosexual) common-law couples,” said Remi Shiraki, the representative of the plaintiff, during a news conference in Tokyo.

Shiraki said on behalf of the plaintiff, “The time I spent with my partner was recognized as a de-facto marriage, and I feel that part of my life has been recognized. I feel like I was saved.

“I'm so happy that more people in my sort of situation will be able to protect themselves.”

Since February, 13 same-sex couples have filed lawsuits at five district courts, claiming it is unconstitutional for Japan to refuse to recognize their marriages.

“The ruling (at the Utsunomiya district court) is the one that can positively affect same-sex couple’s trials,” said Shinya Maezono, 44, a lawyer who supports their legal battle.

The plaintiffs argued that the concept of Article 24 assures the “freedom of marriage,” and thus surely means that anybody can get married without any interference from the government or a third party.

The article in question does not prohibit same-sex couples from getting married, those plaintiffs argued.

“The ruling at the Utsunomiya District Court was in line with the argument made by the plaintiffs asserting their rights as same-sex married couples," Maezono said.

“It is probably the first time there has been a ruling based on the concept where the Constitution does not prohibit same-sex couples from getting married.”

Masayuki Tanamura, a professor of family law at Tokyo's Waseda University, said, “This is an epoch-making ruling and a big step toward the acceptance of same-sex marriages.”