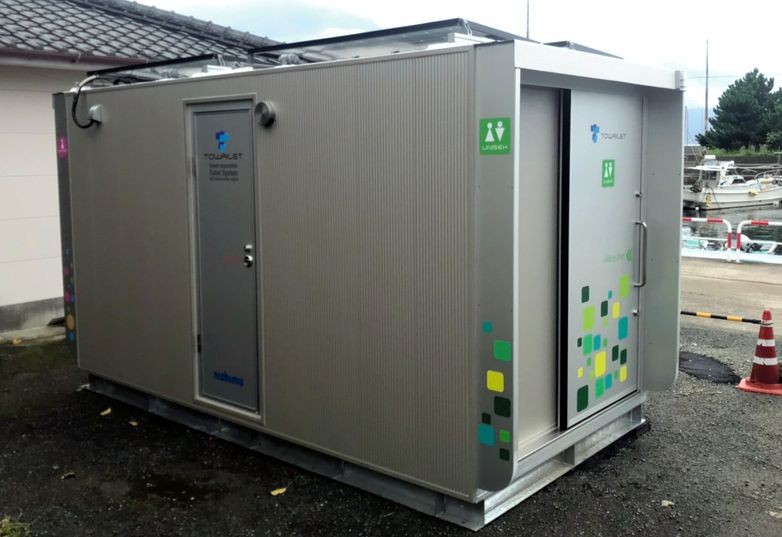 A self-sufficient Towailet restroom system set up at a port on Yushima island in Kami-Amakusa, Kumamoto Prefecture (Provided by Kami-Amakusa city)

KAMI-AMAKUSA, Kumamoto Prefecture--On this remote southern island where cats are said to outnumber humans, self-cleaning toilets powered by the sun would seem like a no-brainer.

But the facilities are not for the convenience of the felines. They're for the many visitors who come to check out the creatures.

With more tourists visiting the so-called island of cats, the lack of public restrooms became a concern.

The device breaks down excrement so that feces and urine can dissolve in the toilet's special unit using microorganisms within several hours. After the process, colon bacillus and other harmful substances are removed from the treated waste with special filtering technology, making flush water odorless.

As the processed water is circulated within the system, almost no sludge is generated, and the inclusion of a solar panel and battery makes it unnecessary for the device to be connected to outside power sources.

In the aftermath of the 2011 earthquake and tsunami disaster off Japan's northeastern coast, the Japanese Red Cross Kumamoto Hospital in Kumamoto, which was involved in related rescue activities, and Kyushu Electric started research to develop a toilet and other products that could be used at evacuation centers and elsewhere both during emergencies and under normal circumstances.

Taking over the project, Nishimu Electronics Industries completed the new bathroom and is now applying for a patent for its purification technology.

The restroom still in development was introduced on a trial basis at a volunteer center after torrential rain devastated the northern Kyushu region in July 2017, receiving positive responses.

Two Towailet units--one for females and the other for use by both sexes--were recently installed on Yushima at a cost of 20 million yen ($185,300).

While Towailet has been set up on the island and several other areas across Japan prior to the beginning of sales, the company plans to make the product available for municipalities and businesses in the second half of this fiscal year.