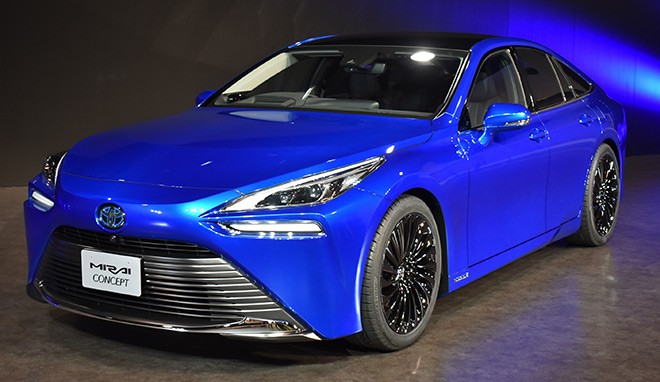 Toyota Motor Corp. announced that it will roll out a prototype of a new model of its fuel-cell vehicle Mirai at the 2019 Tokyo Motor Show, which will open on Oct. 24.

The automaker aims to extend the driving range of the new model by about 30 percent by completely redesigning the fuel-cell system of the current Mirai model, released in 2014.

Toyota is planning to sell the new Mirai in Japan, North America, Europe and other regions from late 2020.

“We need to aim for developing a model that appeals to consumers with an excellent performance to encourage more people to buy fuel-cell vehicles,” said Yoshikazu Tanaka, chief engineer of the Mirai.

Fuel-cell vehicles run on electricity generated using a chemical reaction between hydrogen and oxygen in the air.

The automaker regards the vehicles as the “ultimate eco-friendly cars” since they don’t emit carbon dioxide while on the road.

Global sales of the current Mirai model stood at around 10,000 by August. More hydrogen stations are needed to promote the wider use of fuel-cell vehicles.

Meanwhile, Toyota’s luxury Lexus brand announced that it will unveil its first concept car that runs on electricity at the Tokyo Motor Show, which continues through Nov. 4.