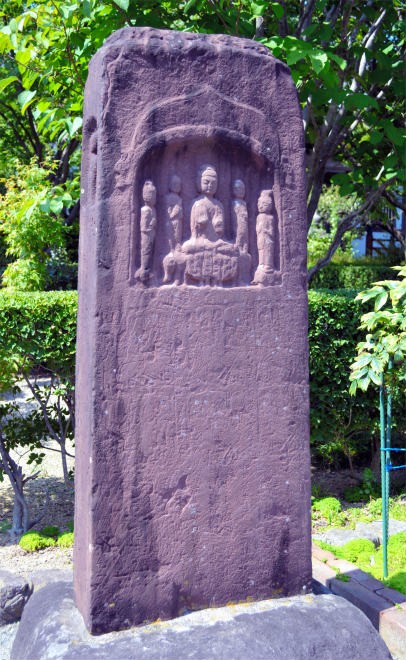 One of the stone slabs found to date from sixth century China at Ioji temple in the Teramachi district of Kurume, Fukuoka Prefecture. This photo was taken in July. (Takeshi Toyama)

KURUME, Fukuoka Prefecture--A pair of stone slabs with Buddhist engravings whose origin was shrouded in mystery turn out to have been carved in China more than 1,400 years ago.

A researcher of Chinese Buddhism history examined the items in the grounds of Ioji temple in the Teramachi district here after being contacted by a local historian.

The researcher ascertained that they are a type of art form known as “zozohi” featuring both Buddhist figures and texts created during the Northern Qi Dynasty (550-577).

“I felt uneasy over the years as their provenance was not known, but now that I know I feel much more relaxed about it,” said Masao Inoue, 77, honorary chief priest of Ioji.

Inoue said the stone memorials were donated by a worshiper here 30 years ago. The follower suspected they were brought to Japan from China and that they had been moved to several sites before they ended up in Kurume. But the worshiper had no idea when and why the monuments were taken.

Ioji erected the slabs in a corner of the temple complex and asked a number of experts to examine the artifacts. But none could find clues to their origin.

A turning point came in February 2017 after local historian Yoshiaki Yokoo, 69, chanced upon the memorials and realized they bore features in common with stone carvings he had seen in China.

Scouting around for experts to verify his hunch, Yokoo finally got in contact with Chisui Sato, a visiting professor of China Buddhism history at Ryukoku University.

During visits to Ioji on Sept. 2 and 3, Sato realized the stone slabs bore era name etchings that can be converted into 563 and 572 as well as the characters representing Northern Qi.

“The engraving style as well as the way the characters are depicted are unique to the dynasty,” said Sato in reference to the texts on the stones.

Although only half of the characters remain legible due to severe erosion, Sato concluded that they were commissioned by “a minor regional clan.”

According to Sato, zozohi were created from the Northern and Southern Dynasties (439-589), which were unified by the short-lived Sui dynasty in 589, through the Tang Dynasty (618-907).

They were mostly churned out during the Northern Qi Dynasty, one of five northern dynasties that quickly emerged and fell, and straddled what are now Hebei, Shandong and Shanxi provinces.

Internal dissent brought the dynasty to a quick end.

Sato, who has examined more than 100 zozohi, grottoes and other Buddhist-related sites, called the stone slabs important materials for research “because a specific clan name is shown on them.”

Speculating on how the stones arrived in Japan, Ryuichi Saito, a curator at the Osaka City Museum of Fine Arts, which owns more than 10 zozohi, said they were likely imported from China after the Qing Dynasty (1616-1912) collapsed.

Now that the temple knows what it has in its possession, Ioji set up a roof to protect the artifacts from the elements.

It is currently considering other options to preserve them.