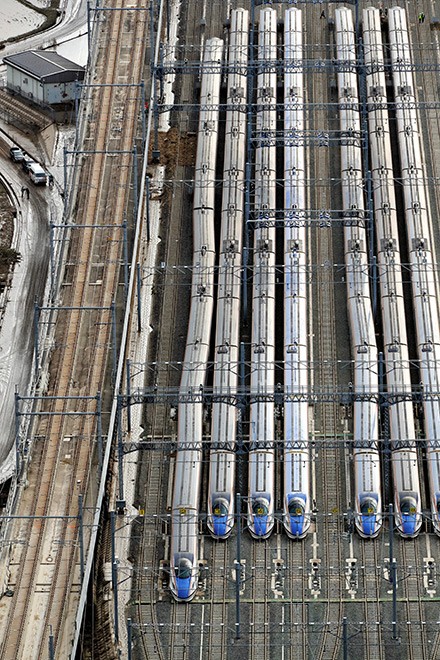 Hokuriku Shinkansen trains, including one at far left and another second from right, derailed at the Nagano Shinkansen rail yard due to flooding from Typhoon No. 19. (Eiji Hori)

Service along a Shinkansen route connecting Tokyo with Ishikawa Prefecture remains disrupted after 10 bullet trains in a rail yard were inundated by floodwaters from Typhoon No. 19.

Railway operator East Japan Railway Co. (JR East) said that all bullet train lines were back to normal except for the Hokuriku Line, which has been limited to service across two sections.

The company added that it will take considerable time to fully restore the line, as the extent of the damage to the train cars has yet to be determined.

Service from Tokyo Station now only goes as far as Nagano Station and back, while operations from Kanazawa Station in Ishikawa Prefecture only extend to Joetsu-myoko Station in Niigata Prefecture and back.

JR East officials said it would take a week or two to restore service along the entire line between Tokyo and Kanazawa. Even then, a special schedule, likely 50 percent to 60 percent of the normal timetable, would likely have to be adopted for an extended period because of a train shortage and other reasons.

The Hokuriku Shinkansen Line has a number of unique features that make it difficult to use other bullet train cars.

The JR East Nagano Shinkansen rail yard where the 10 trains were damaged, representing one-third of the fleet used on the line, is about 10 kilometers from Nagano Station.

The two rail yards handle maintenance of trains used on the Hokuriku Line.

However, JR officials said that as of Oct. 15, they had still been unable to confirm the extent of the damage to the trains, some of which had derailed due to the flooding.

One Shinkansen engineer said: “The lower part of the rail cars holds not only the wheels but also electronic equipment used to control the motor and brakes. If the semiconductors were covered in water, the entire part would have to be replaced.”

Any passenger seats that were covered with water would also have to be replaced before the trains are used.

Shinkansen trains normally have an operating life of about 15 years. However, E-7 and W-7 series trains are among the most advanced, having been developed for use from 2015 when the Hokuriku Line started operating.

As the cost of building each 12-car train is about 3.3 billion yen ($30 million), the loss due to natural disaster damage from the trains alone would reach more than 30 billion yen if all 10 flooded trains need to be scrapped.

Even if repairs are possible for some trains, considerable time is required to confirm safety before they can return to operation.

The construction of new trains for the line would take about one year.

Bullet trains are designed to operate in accordance with electricity frequencies used by electric power utilities that service various routes.

While other Shinkansen lines can operate trains that handle a single frequency, the Hokuriku trains need a special system to deal with the rapidly changing frequencies along the line.

The Hokuriku trains also feature higher power output and braking functions to allow them to ascend the Usui Pass. The section between Annaka-haruna and Karuizawa stations covering the pass has one of the steepest gradients among all Shinkansen routes.