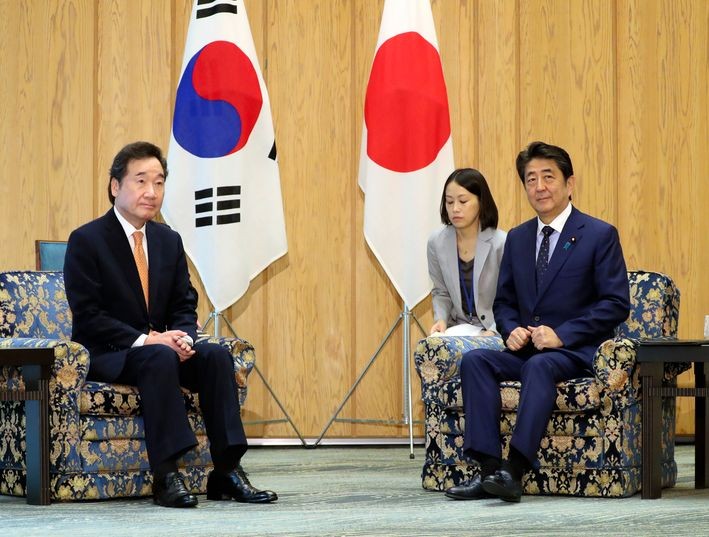 The prime ministers of Japan and South Korea recognized the urgent need to mend the deeply strained relationship between the two countries in their meeting in Tokyo on Oct. 24.

Lee, who visited Japan to attend the enthronement ceremony held for Emperor Naruhito on Oct. 22 in the Japanese capital, is the second highest-ranking official of the South Korean administration of President Moon Jae-in.

If their words really reflect the views of the two governments, both Tokyo and Seoul should take actions that match them.

Both governments are responsible for the biting chill in the bilateral ties that has caused a dampening effect on a wide range of areas including trade, tourism and grass-roots exchanges between the two countries.

Nothing substantial emerged from the meeting, which, according to news reports, produced only vague remarks by the two politicians about the current diplomatic crisis between the two neighbors.

Japanese and South Korean officials must realize that if both sides only wait for the other’s concession, that would be tantamount to allowing the situation to remain as is.

In an interview with The Asahi Shimbun before his trip to Japan, Lee said he would like to see the countries return to the relationship they had prior to July through dialogue as soon as possible.

His remarks indicate that Seoul regards Japan’s move in July to tighten controls on Japanese exports to South Korea as the trigger of the rapid deterioration of the bilateral ties. He effectively proposed to bring the bilateral relationship back to its state prior to that move.

But the crux of the matter is the issue of compensation to former Korean wartime laborers. There can be no real improvement in the ties without a solution to the issue.

In his meeting with Abe, Lee said South Korea has abided by the 1965 treaty to normalize diplomatic ties and the bilateral agreement that settled all war reparations issues and will continue to do so.

These pacts did not settle all history-related issues completely, but the two countries managed to prevent them from hurting their relations seriously through diplomatic wisdom and ingenuity for more than five decades.

The issue of compensation to wartime Korean laborers, known as “choyoko” (drafted workers), is particularly sensitive. But there can be no progress toward a better future of the bilateral ties without serious efforts to overcome this diplomatic challenge from both sides.

From this point of view, the Japanese government’s move to strengthen controls on exports to South Korea has been counterproductive.

It was an attempt to prod Seoul into action by taking a strong action. But it has only hardened the attitudes of the Moon administration and the South Korean public by linking an economic issue to the history-related dispute.

That has resulted in a sharp drop in the number of South Korean tourists visiting Japan, delivering a heavy blow to Japan’s tourist industry. Sales of Japanese products in South Korea, including automobiles, have also plunged. South Korean industries are also concerned about possible repercussions from Japan’s export restrictions.

Seoul made its own mistake when it decided to scrap an intelligence-sharing agreement with Japan called the General Security of Military Information Agreement (GSOMIA).

With the agreement set to expire in less than a month, some politicians in South Korea are calling for an extension of the pact. But the Moon administration should not have brought a security issue into the already complicated equation of the conflict in the first place.

An international conference will be held in early November in Thailand, which will be attended by both Abe and Moon.

In order to bring an end to this futile conflict, which only damages both sides, the two leaders need to demonstrate strong political leadership.

It is simply abnormal that the leaders of Japan and South Korea have not met for more than a year.

Abe and Moon should meet face to face as soon as possible to tackle the situation together through wise actions to protect the interests of both nations.

The longer this corrosive impasse in the bilateral relationship lasts, the more difficult it will be to unravel the diplomatic crisis.