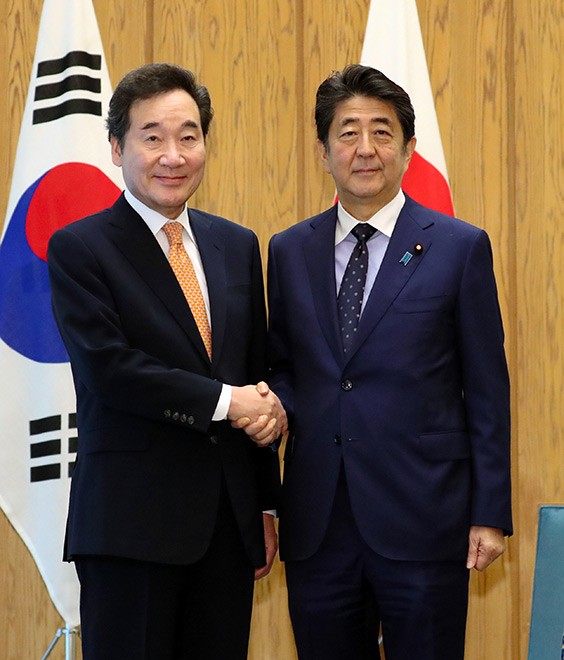 Prime Minister Shinzo Abe and South Korean Prime Minister Lee Nak-yeon met in Tokyo on Oct. 24 for the first high-level talks between the two nations in about 13 months, but made little progress resolving bilateral disputes.

While the meeting was brought about in part by Seoul's more conciliatory stance, Tokyo is still adamant that improved ties depend on South Korea abandoning its demand for Japanese firms to compensate former Korean wartime laborers.

Japan continues to protest the rulings as going against a 1965 bilateral agreement that it says settled all compensation claims by South Korea from World War II.

Though Abe pressed Lee in their meeting to have South Korea abide by promises made between the two nations, he did not present any specific measures to achieve a breakthrough.

A high-ranking Japanese government official said, "In the wake of this meeting, the question now becomes one of what South Korea will do next. The ball is in their court."

Lee told South Korean reporters after his meeting with Abe that the "formal talk" was the result of informal contact between diplomats of the two nations.

A high-ranking South Korean government official who accompanied Lee to Tokyo said, "This was the first high-level meeting since ties deteriorated from July. It marks a turning point."

The meeting was made possible because Lee was in Japan to attend the Oct. 22 enthronement ceremony for Emperor Naruhito. According to a high-ranking South Korean government official, Seoul initially considered having South Korean President Moon Jae-in attend after it received a message from Abe welcoming a visit to Japan by Moon.

However, in the end it was decided to have Lee attend on Moon's behalf, given the lack of progress to resolve the issue of compensation for wartime laborers.

But Lee was actively involved during his stay in Japan with efforts to improve relations with Japan.

The South Korean prime minister met with ordinary Japanese in Tokyo's Shin-Okubo district, which has many Korean shops and restaurants, and held discussions with university students elsewhere, emphasizing the importance of changing public attitudes toward South Korea.

Seoul's softer stance reflects growing pressure from the United States for it to continue the General Security of Military Information Agreement (GSOMIA) with Japan as well as the Moon administration's declining approval ratings.

GSOMIA, which South Korea decided to pull out of in retaliation to tighter export controls Japan implemented, becomes invalid on Nov. 23.

Without a major concession from Japan, Seoul is unlikely to be able to convince the South Korean public that it should rejoin the agreement.

Concerns about future trade with Japan as well as lower exports have also contributed to a slowing of South Korea's economy.

The Moon administration, facing national assembly elections next spring, is occupied with countering criticism over the recent resignation of Justice Minister Cho Kuk barely a month after he took office.

Cho's wife and other family members have been embroiled in a scandal regarding financial irregularities and questions about their children's university admission.

Amid such circumstances, South Korea is seeking to hold a meeting between Abe and Moon on the sidelines of international meetings scheduled from November as a way to demonstrate an improvement in bilateral ties.

"With the series of errors in domestic politics, the administration can no longer afford to continue with a hard-line stance toward Japan," said a source close to the South Korean presidential office.

While Tokyo has insisted that the wartime laborer compensation issue be resolved first, officials also acknowledge that something must be done now that national security might be affected with the approaching end of the GSOMIA with South Korea.

Japanese business leaders are also raising concerns about the negative effects of the spat between the countries on the economy.

Hiroaki Nakanishi, chairman of Keidanren (Japan Business Federation), met with Lee on Oct. 24 and asked that efforts be made to improve bilateral ties.

(This article was written by Takeshi Kamiya, Narumi Ota and Hironori Kato.)