Sendai specialty: Fish cake-shaped guitar sure to strike a chord 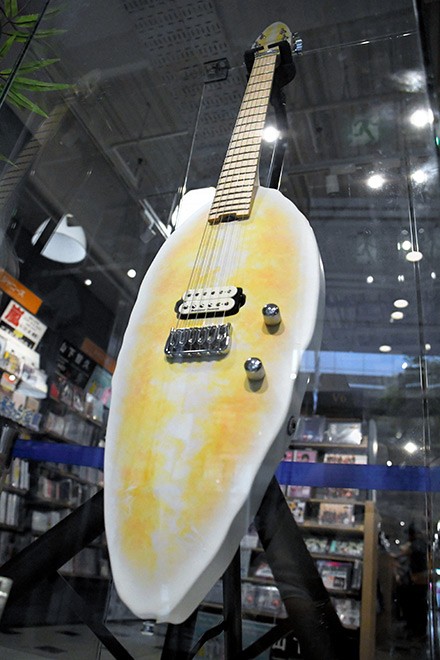 The “Sasakama Guitar” looks so real that one might think it gives off the aroma of roasting while on display at Yamano Music Co.’s Sendai outlet. (Shinjiro Omiya)

In fact, it's a high-end electric guitar themed on the local specialty dish and sold at the Sendai outlet of Yamano Music Co.

The body of the "Sasakama Guitar" has a gentle curve to it. The surface has been scorched with a burner, giving it a light brown color.

The instrument, despite its unusual appearance, plays like a regular guitar and is suitable for any genre of music, the shop said.

The guitar is the brainchild of Masahiko Yamano, the company's 54-year-old president, who said he wants to "energize the Tohoku region with the power of music.

The northeastern region is continuing to rebuild following the devastating March 2011 earthquake and tsunami disaster.

The company designed the instrument based on food samples borrowed from Abe Kamaboko-ten, a kamaboko shop in the city believed to have come up with the name "sasa kamaboko."

Shota Mochizuki, the 40-year-old floor manager of the music shop, said he hopes the instrument will be a new Sendai specialty.

He said he thought, "Sendai rocks," when he saw the instrument.