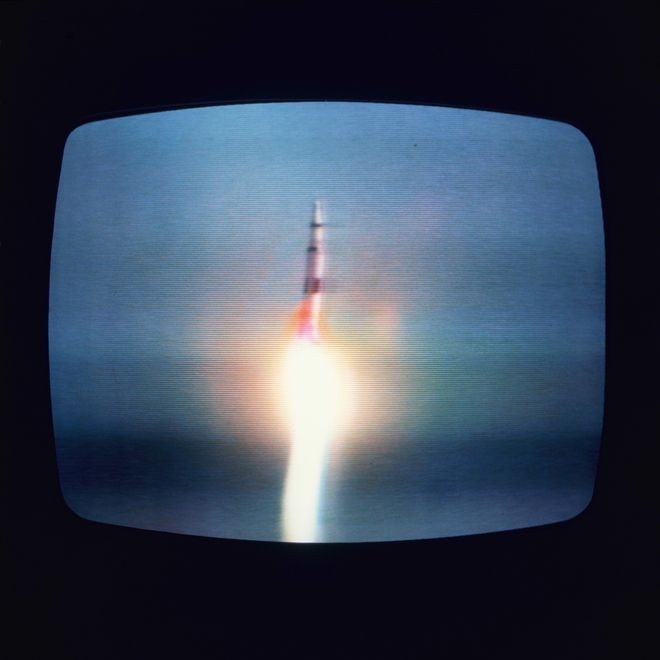 A TV screen shows the launch of Apollo 11 broadcast live via satellite on July 16, 1969. (The Asahi Shimbun)

Humans first landed on the moon half a century ago in July 1969. Newspaper reports of U.S. Apollo 11’s successful mission were palpably euphoric, with headlines such as “Grand feat in the history of space exploration” and “Next stop: Mars.”

Osamu Kimura, 64, who runs a stargazers lodge in the southern foothills of Mount Yatsugatake, Yamanashi Prefecture, was a second-year junior high school student at the time.

He recalls all the hype on television leading up to Apollo 11’s liftoff, and his being glued to the TV screen to watch it live.

At the moment of the spaceflight’s lunar landing, Kimura was in a bus on his way to the school’s summer camp. He remembers his teacher shouting, “He just walked on the moon.”

In university, Kimura joined the astronomy club and stayed up all night every weekend to observe the sky. He took a white-collar job upon graduation but quit when he was 47 and relocated to Yamanashi Prefecture so he could stargaze to his heart’s content.

“I certainly believe my decision had very much to do with my teenage fascination with lunar exploration,” he said.

Fifty years ago, the world was in the midst of the Cold War, and the United States and the Soviet Union were staking their respective national prestige on who would get to the moon first.

I recall these words of an astronomer I interviewed in the past: “The lunar landing race itself was of minor significance. Little was gained from it in terms of astronomical research, as missions of real importance, such as exploration of water and minerals, were considered secondary by the superpowers.”

Still, there was no question that the Apollo 11 mission instilled big dreams in the hearts of boys and girls around the world.

Japan’s famed astronauts, including Mamoru Mori and Koichi Wakata, have all said that Apollo 11 was what got them interested in space exploration. And that, certainly, was the spacecraft’s great contribution to the human race.

I gazed at the night sky from Star Party, the lodge co-managed by Kimura and his wife. Looking at Jupiter, Saturn and Vega, the great triangle in the summer sky, I lost all sense of time as I listened to the “lecture” given by a former boy whose fascination with astronomy began with the 1969 lunar landing.