Workers assemble a life-size model of a Deinocheirus dinosaur at the National Museum of Nature and Science in Tokyo. (Video footage by Toshiyuki Takeya) 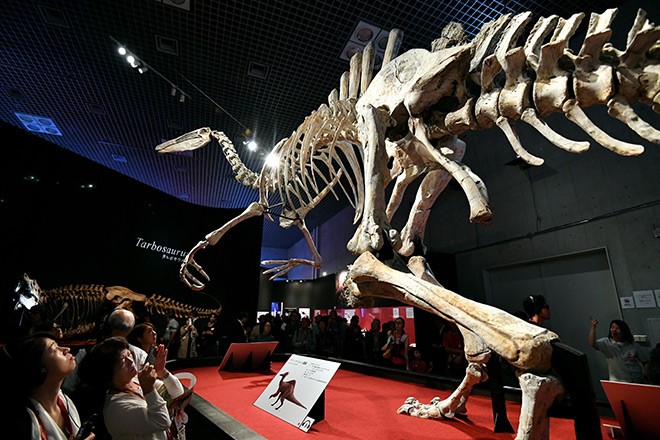 A model skeleton of the Deinocheirus dinosaur makes its world debut at the Dinosaur Expo 2019 in Tokyo on July 13. (Yosuke Fukudome)

A full model skeleton of a dinosaur known as "horrible hand" made its world debut on July 13 at the Dinosaur Expo 2019 held at the National Museum of Nature and Science in the Ueno district of Tokyo.

A fossilized forelimb of the Deinocheirus dinosaur was unearthed in Mongolia's Gobi Desert in 1965. It was found in stratum formed 70 million years ago.

But the animal remained a mystery for many years because fossil parts of the rest of its body had not been found. It was only in 2006 and then again three years later that other body parts were unearthed in the Gobi Desert.

Using those fossils as a basis, a model measuring 11 meters in length and 4.5 meters tall was put together for the Tokyo exhibition.

Its name Deinocheirus is Greek for "horrible hand" because of the animal's large forelegs and claws.

In addition to the full model, some of the actual fossils found in the Gobi Desert are also on display.

The other highlight of the exhibition is a full model skeleton of a Hadrosaurus dinosaur discovered in Mukawa, Hokkaido, in 2003.

About 80 percent of the skeleton of the 8-meter-long dinosaur was eventually unearthed from stratum formed about 72 million years ago.

The display of the full model skeleton and actual fossils of the Hadrosaurus is the first held outside of the town where the fossils were found.

The expo is jointly organized by the museum, The Asahi Shimbun and other parties, and will run until Oct. 14.