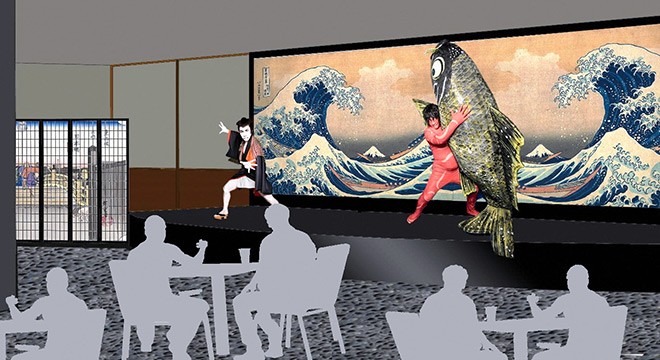 An artist’s rendition of a show aimed for foreign tourists at "Ukiyo-e Cafe" in Yokohama’s Naka Ward. (Provided by the Kanagawa prefectural government)

YOKOHAMA--Traditional ukiyo-e art will get a modern makeover at a venue here that will open in August allowing overseas visitors to enjoy a show inspired by Japanese culture over dinner.

The opening of the venue, dubbed “Ukiyo-e Cafe,” was announced by the Kanagawa prefectural government on July 12.

“We have worked to offer shows that visitors can enjoy at night,” Governor Yuji Kuroiwa said at a news conference. “The combination of ukiyo-e and the latest technology will make shows fun for everyone.”

The prefectural government contracted with Shiro-A, a troupe offering performances in many parts of the world, for shows at Ukiyo-e Cafe.

Group members will dance to the tunes of techno sounds and to choreographed projection mapping in which performers appear to come out of a ukiyo-e painting.

The show will be performed with few Japanese words so that foreigners with little command of Japanese can enjoy it.

The 20 million yen ($185,185) program by the prefectural government comes after a need was cited by tourism industry officials for a night-time entertainment and cultural facility for foreign travelers who will descend on Yokohama.

The port city hosts the final and other games of the Rugby World Cup 2019, which runs from September to November.

Yokohama is also expected to be visited by hordes of tourists from abroad due to its proximity to Tokyo, which will host the 2020 Tokyo Olympics and Paralympics.

Ukiyo-e Cafe will be set up within banquet space of the Ei Ichibankan French restaurant on the sixth floor of the Kanagawa Kenmin Hall in the city’s Naka Ward. The hall hosts various cultural and artistic events.

Ukiyo-e Cafe, with a capacity for 75 people, will feature a show at 6 p.m. and 8 p.m. daily. It will be closed on Tuesdays and Wednesdays.

Tickets are available online and at the venue counter.