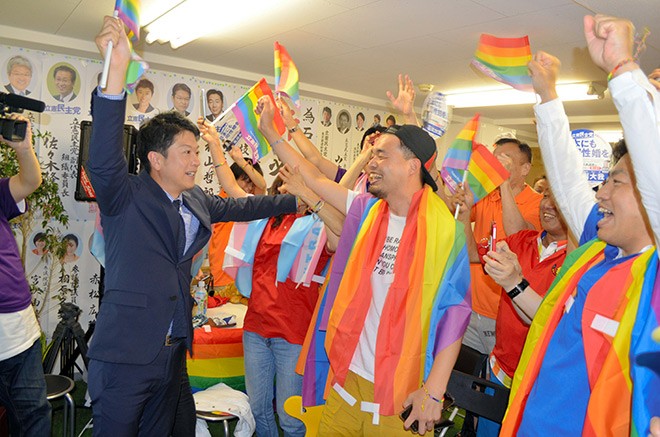 Taiga Ishikawa, left, celebrates with his supporters in Tokyo on July 22. (The Asahi Shimbun)

Taiga Ishikawa, 45, was elected to the Diet's Upper House on Sunday, on a platform calling for marriage equality, with the main opposition Constitutional Democratic Party, also the party of Japan's first openly LGBT+ lawmaker, elected in 2013.

"Since the early 2000s, the issue of same-sex marriage has progressed leaps and bounds," Ishikawa told the Thomson Reuters Foundation by phone on Tuesday.

"It will happen within the six years of my term, I am sure."

Japan's laws on LGBT+ issues are relatively liberal compared with many Asian countries, with homosexual sex legal since 1880, but being openly gay remains largely taboo.

Same-sex marriage is illegal and Prime Minister Shinzo Abe has opposed efforts to legalize it.

Same-sex marriage is legal in 27 countries, as well as Taiwan, which China regards as a wayward province. The self-ruled island legalized same-sex marriage in May while Thailand has drafted a bill that would recognize same-sex civil partners.

Ishikawa said his election showed that a growing number of Japanese people backed same-sex marriage. He credited strides made towards marriage equality recently in countries such as Ecuador and Northern Ireland.

"It has been incredibly empowering to the Japanese LGBT community to see the growing acceptance overseas of same-sex marriage," he said.

"I think we've got a breakthrough now and I plan to move the conversation (on same-sex marriage) forward."

However, a solid victory for Abe's ruling bloc in Sunday's Upper House election has led some LGBT+ rights advocates to question whether reforms will be achieved soon.

In a televised party leader debate ahead of the election, Abe, 64, voiced his opposition to same-sex marriage.

"We now have an openly gay guy in parliament, but at the same time we still have the strongest party which is ... against the idea of marriage equality for now," said Kan Kikumoto, an LGBT+ activist in Tokyo.

Despite the political opposition, a survey by Japanese advertising giant Dentsu found that 78 percent of people aged 20 to 60 favored legalizing same-sex marriage, up from 51 percent of those polled in 2017 by Japan Broadcasting Corp. (NHK).